Dominion Energy closed out the holiday weekend with two bombshell announcements, disclosing Sunday that it is selling its natural gas transmission and storage assets to an affiliate of Warren Buffett’s Berkshire Hathaway Inc. in a transaction valued at $9.7 billion. It also has decided, along with joint-venture partner Duke Energy, to cancel the 600-mile, 1.5 Bcf/d Atlantic Coast Pipeline (ACP). 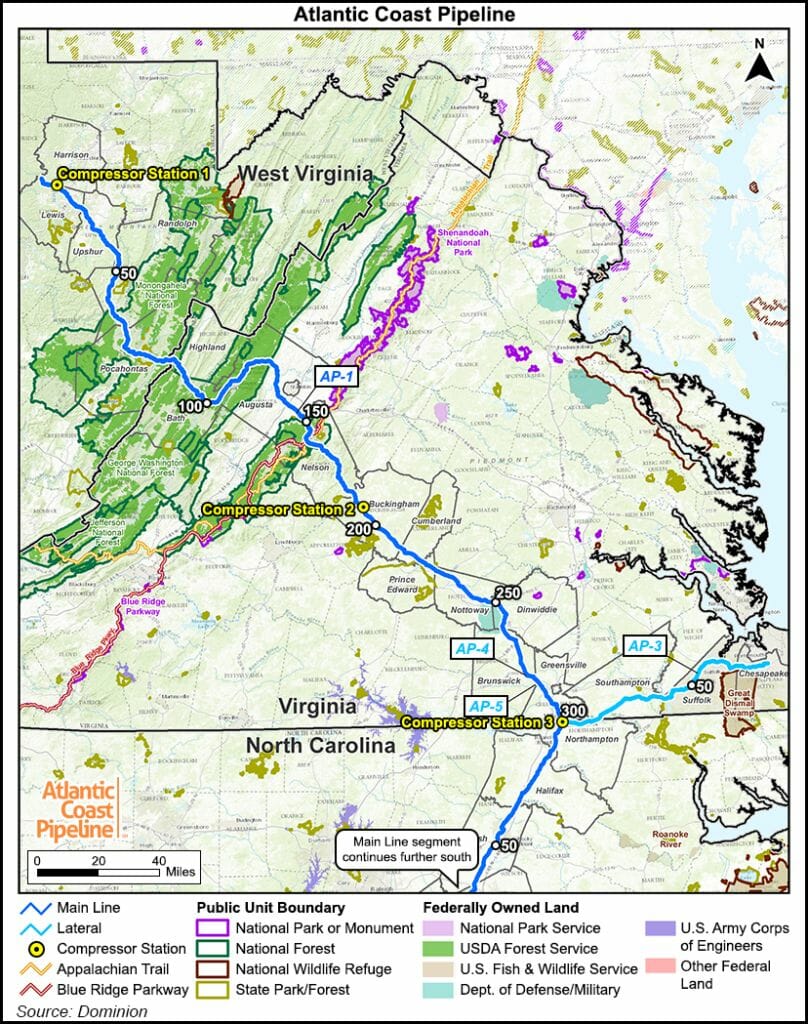 The ACP cancellation comes just days after the U.S. Supreme Court ruled 7-2 in favor of the project, reversing a lower court ruling that had jeopardized the pipeline’s ability to cross beneath the Appalachian Trail near the Virginia/West Virginia border.

Despite the favorable ruling, “which vindicated the project and decisions made by permitting agencies, recent developments have created an unacceptable layer of uncertainty and anticipated delays for ACP,” Dominion said.

An April ruling by the U.S. District Court for the Southern District of Montana to vacate the Nationwide Permit 12 (NWP 12) water-crossing authorization issued by the U.S. Army Corps of Engineers for TC Energy Corp.’s Keystone XL crude oil pipeline has thrown into question the future of oil and gas pipeline projects across the Lower 48, including ACP, which would have transported gas from the Marcellus and Utica Shales through West Virginia, Virginia and North Carolina.

The Montana judge also issued an injunction, which was upheld on appeal, preventing the Corps from issuing new NWP 12 permits while TC Energy’s underlying appeal of the April ruling is ongoing. The Corps has requested a stay of the injunction on new permits from the U.S. Supreme Court.

The prospect of a stay “would not ultimately change the judicial venue for appeal nor decrease the uncertainty associated with an eventual ruling,” Dominion said, adding, “the Montana decision is also likely to prompt similar challenges in other Circuits related to permits issued under the nationwide program including for ACP.”

Due to a series of legal challenges to the project’s federal and state permits, ACP’s estimated cost has risen to $8 billion from original guidance of $4.5-$5 billion, and the most recent estimated in-service date of early 2022 “represents a nearly three-and-a-half-year delay with uncertainty remaining,” Dominion said.

“We regret that we will be unable to complete the Atlantic Coast Pipeline,” said Dominion CEO Thomas F. Farrell, II and Duke Energy CEO Lynn J. Good in a joint statement, highlighting that demand for the project was “driven by the regional retirement of coal-fired electric generation in favor of environmentally superior, lower-cost natural gas-fired generation combined with widespread growing demand for residential, commercial, defense and industrial applications of low-cost and low-emitting natural gas.”

They also noted that about 90% of the project’s capacity had been reserved.

The Montana decision and the cancellation of ACP have also raised questions about the future of another embattled project, the Mountain Valley Pipeline (MVP), which also is designed to move gas from the Marcellus and Utica shales.

In a note to clients on Sunday, analysts at Clearview Energy Partners LLC said they still believe MVP “can resolve its outstanding permitting issues this summer in order to resume construction and that its current schedule remains feasible.

“That said, we view the cancellation of ACP as a sign of the power that subnational greening can have to arrest energy infrastructure projects which require years to successfully permit and construct in the face of increasingly sophisticated and effective opposition from environmental advocates and landowner groups.”

Wood Mackenzie’s Dulles Wang, director for North America gas, on Monday called ACP the “third high-profile victim” among Northeast region infrastructure projects in the last six months, following the cancellation of the Constitution Pipeline and the denial of a crucial state water permit for the Northeast Supply Enhancement project in May.

Wang said that while the Marcellus and Utica areas have ample spare pipeline capacity currently, gas supply from the Northeast is expected to grow by over 10 Bcf/d by 2040 versus 2020 levels in order to meet growing demand.

“Without new longhaul takeaway pipelines, Northeast growth may be constrained and other…higher cost supply may be necessary to develop,” Wang said, adding, “The real losers with ACP’s cancellation will likely be the power consumers in the southeast U.S., who will need to look for alternative options to find gas supply to fuel the region’s coal-to-gas switching efforts.

Industry groups expressed their dismay at the ACP cancellation.

“The cancellation of the Atlantic Coast Pipeline sets America back by denying working families and businesses access to affordable and cleaner U.S. natural gas and halting thousands of middle-class sustaining jobs,” said American Petroleum Institute CEO Mike Sommers and North America’s Building Trades Unions president Sean McGarvey in a joint statement. “Like too many shovel-ready projects before it, the Atlantic Coast Pipeline faced legal and permitting challenges waged without merit by activists, and these challenges ultimately cost Americans along its route the environmental, employment and economic benefits that modern pipeline projects bring.”

Natural Gas Supply Association president Dena Wiggins said: “It’s a shame that litigation and regulatory delays brought this necessary project to a halt…Natural gas has not only enabled tremendous reductions in carbon dioxide over the last decade, but also will continue to be a reliable partner to renewables over the coming decades. It is an essential building block of the clean energy future.”

The bad news for pipelines continued on Monday, as the U.S. District Court for the District of Columbia ordered Energy Transfer LP to temporarily halt operation of the Dakota Access Pipeline (DAPL), pending the completion of an environmental impact study (EIS) for a section of the pipeline running underneath Lake Oahe.

Judge James Boasberg said the Corps violated the National Environmental Policy Act when it issued a water-crossing permit for DAPL, which has been flowing crude oil from North Dakota’s Bakken Shale since 2017.

Between the ACP cancellation and DAPL shutdown, “we are deeply troubled by these setbacks for U.S. energy leadership,” Sommers said on Monday, adding, “The need to reform our broken permitting system has never been more urgent.”

The sale of transmission and storage assets to Berkshire, meanwhile, will allow Dominion to focus “on its premier state-regulated, sustainability-focused utilities that operate in some of the most attractive regions in the country,” said Farrell, highlighting Dominion’s objective of achieving net-zero carbon and methane emissions by 2050.

“Over the next 15 years, we plan to invest up to $55 billion in emissions-reduction technologies, including zero-carbon generation and energy storage, gas distribution line replacement and renewable natural gas.”

In addition, between 2018 and 2025, Dominion expects to retire more than 4 gigawatts of coal and oil-fired electric generation.

Farrell said the narrowing of focus would allow Dominion to increase its long-term earnings growth rate guidance by around 30%.

In a conference call with analysts on Monday, Farrell said the divestiture would give Dominion more of a “pure-play profile” as a state-regulated gas and power utility and improve the company’s balance sheet “as we embark on what will the company’s largest ever programmatic capital investment plan, totaling tens and tens and tens of billions of dollars.”

From 2020 to 2035, Dominion plans to invest up to $47 billion in zero-carbon power generation and storage projects, up to $6 billion in gas line replacement projects and up to $2 billion in renewable natural gas.

Under the deal, Berkshire is to acquire more than 7,700 miles of natural gas storage and transmission pipelines and about 900 Bcf of gas storage currently operated by Dominion.

Dominion’s interest in ACP is not included in the transaction, and the company will retain a 50% stake in Cove Point.