February natural gas forward prices enjoyed a wild ride between Jan. 12 and 18 as shifting weather sentiment, a surprise storage report and returning production left the benchmark Henry Hub down only a penny but Northeast markets down as much as 86 cents, according to NGI’s Forward Look. 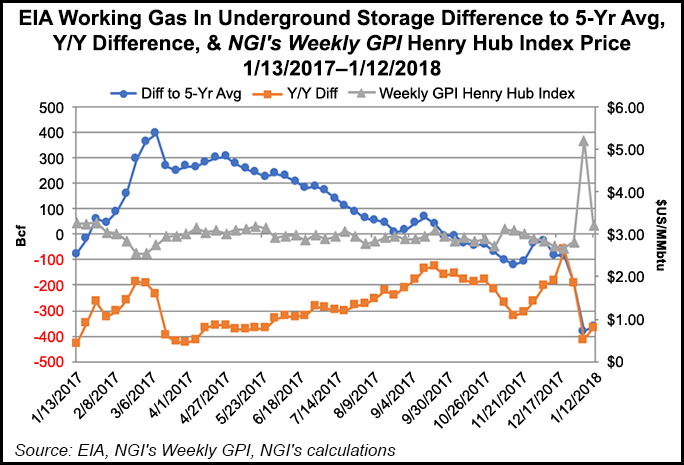 Nymex futures set the tone for most market hubs, with February futures shedding about 7 cents last Tuesday (Jan. 16) as weather forecasts showed the frigid conditions blanketing much of the United States turning much milder by Tuesday (Jan. 23). Last Wednesday brought about a sharp rebound in futures, with a 10-cent rally driven by expectations of another stout storage withdrawal after the previous week’s all-time record draw.

But the U.S. Energy Information Administration failed to deliver what the market had hoped for, reporting on Thursday a 183 Bcf pull from inventories for the week ending Jan. 12. The draw came in about 15 Bcf below market expectations and even farther below the year-ago draw of 230 Bcf and the five-year average 203 Bcf.

The February contract fell promptly as the figure reached trading desks at 10:30 a.m. EDT, plunging within minutes from around $3.190 to just under $3.130. By 11 a.m. EDT, February was trading around $3.100, down 13 cents from Wednesday’s settle. The Nymex February futures contract ultimately settled Thursday at $3.189, down 4.3 cents on the day.

Traders appeared to be analyzing the storage data differently by Friday, as the prompt month traded in positive territory throughout the day. Even with a looser EIA print, and with several weeks of winter remaining, “the market still sees it necessary to price in the risk of stockpile shortages moving through the winter,” Bespoke Weather Services said.

Still, weather remains front and center for the gas market, and temperatures are expected to rise considerably over the next several days after falling to the teens in places that rarely see such frigid conditions.

NatGasWeather forecasters showed temperatures warming to the 40s and 50s across the Great Lakes and Northeast, with highs in the 60s and 70s over the South and Southeast, easing demand considerably compared to the record levels seen in the days after the Martin Luther King Jr. holiday.

Demand is expected to marginally increase during the middle of the week as a weather system coming out of the central United States tracks across the northern and eastern part of the Lower 48. The latest weather data showed the system lingering over the Northeast slightly longer into Thursday (Jan. 25), but a mild break is expected across the eastern half of the country Jan. 26-27.

Yet another weather system is expected to track out of the central part of the country and into the East around Jan. 29, and some of the more recent data related to this system had trended a little colder, NatGasWeather said.

Another mild ridge is expected to set up Jan. 31-Feb. 2 across the eastern half of the country as cold weather is established over the Rockies and Plains.

“The big question is whether this frigid air will advance eastward Feb. 3-7, which we expect will be most important to the markets over the weekend break,” NatGasWeather said.

If the cold materializes, storage deficits versus the five-year average would be expected to exceed -500 Bcf when considering expectations for EIA’s next storage report (for the week ending Jan. 19) are nearly 80-100 Bcf larger than the five-year average of -164 Bcf, the weather forecaster said.

Taking a closer look at the Nymex futures curve, the gains and losses throughout the week actually left the curve not much changed from the start of the week. The Nymex February futures contract was down just 1 cent from Jan. 12-18 to $3.189, March was flat around $2.99 and the balance of winter (February-March) was down 1 cent to $3.09.

Small gains were seen further out the futures curve, however, as the need to replenish stockpiles weighed on the market. The Nymex summer 2018 strip picked up 2 cents to reach $2.85, as did the winter 2018-2019 strip, which hit $3.03.

The recent drawdowns in storage will likely put inventory levels at the end of January below the 2,353 Bcf forecast by the EIA. The EIA is currently projecting January month-end storage levels 269 Bcf below January 2017 levels and around 5% below the average, according to Morningstar Commodities Research analysts.

Meanwhile, month-ending storage levels have U.S. inventories below average for much of the year, “which could test producers and their ability to bring working natural gas storage back to normal levels,” Morningstar analysts said Friday in a client note.

Even more interesting is the pricing dynamic seen further out the Nymex futures curve, which has the 2018-2019 winter strip trading at a rather large premium to the 2019-2020 winter strip, which sat on Thursday at $2.925.

Considering the EIA’s forecast, Morningstar analysts said the market would see a slowdown in production; growth in export demand from both Mexico and potentially the liquefied natural gas seaborne market; and much tighter storage at the end of 2019, which the EIA forecasts to be 7% below the average, compared with 5% below the end of December 2018.

“The fundamentals are pointing to tighter supply and demand two seasons from now, which means the discount should be a premium,” Morningstar analysts said.

With production on the rise following freeze-offs and temperatures starting to climb to more seasonal levels, Northeast markets posted steep declines for the Jan. 12-18 period.

The sharpest decreases occurred in New England, where Algonquin Gas Transmission City-gates February forward prices crumbled by some 86 cents to $10.903, Forward Look shows. March was down a not nearly as impressive 16 cents to $6.622, while the balance of winter (February-March) slid 51 cents to $8.76.

The dramatic sell-off came as demand in the region is expected to soften in the weeks ahead. Data and analytics company Genscape Inc. showed demand averaging 3.18 Bcf/d during the Jan. 22-26 period, down from the Jan. 12-18 average of 3.77 Bcf/d. The following work week should see slightly stronger demand, although not at recent highs. Genscape projected demand averaging 3.334 Bcf/d between Jan. 29 and Feb. 2.

Even Midwest markets put up double-digit declines amid the rising temperatures. At Northern Natural Ventura, the prompt month fell 27 cents during that time to $3.535. March slipped 15 cents to $2.776, and the balance of winter (February-March) dropped 21 cents to $3.16.

In a rare move against the Henry Hub, forward prices at the Houston Ship Channel (HSC) ended the week modestly higher as the dip to well below freezing temperatures along the Gulf Coast led to pipeline constraints and freeze-offs, sending cash prices in the region surging above $8.

A similar pattern was seen at Katy, but the volatility in the cash market had abated by week’s end, with prices descending back to around $3.25 at both points for Friday’s gas day.

California saw some renewed volatility during the week as much colder weather was expected to move into the state over the weekend and then continue throughout the week. Temperatures were expected to mimic or even surpass those that hit the region right before Christmas; that event sent regional basis prices to the highest levels in three years.

SoCalGas announced the new maintenance event on L4000 beginning Wednesday (Jan. 17); the event would reduce firm receipt capacity at the two Needles interconnects (Transwestern and Questar Southern Trails) to zero for an unspecified amount of time. This work comes less than a month after the end of a similar event on the same line. The two points now limited to zero had flowed an average of 231 MMcf/d since their return.

Previously, an interruptible increase of capacity was put in place at the one remaining available point within the SoCalGas Northern Zone, the Kern-Kramer Junction. This was done to offset the import capacity losses due to the L4000 work and two other line remediation events, L235-2 and L3000, both of which remained in effect. Prior to Dec. 22, that point was allowed to flow up to 700 MMcf/d, but since then it has maxed out at 571 MMcf/d, Genscape noted.

SoCalGas utility officials had not yet announced if the Kramer Junction point would be allowed to resume operating capacity increases, but if they were in place, “that could help to alleviate the additional pressure placed again on SoCalGas’ storage fields and could provide a mild check on potential basis price increases,” Genscape said.

Current system-wide storage levels are 62.1 Bcf, which is nearly 25% higher (12 Bcf) than the same time last year. This is likely the result of both a higher allowed working inventory at the Aliso Canyon underground gas storage facility (24 Bcf versus 15 Bcf) and a milder-to-date winter resulting in fewer storage pulls, the Louisville, KY-based company said.

The one-two punch of cold weather and new pipeline restrictions lifted SoCal City-gates February forward prices 13 cents from Jan. 12-18 to reach $3.407. The double-digit gains were limited to the front of the curve, however, as March dropped 2 cents to $2.743 and the balance of winter (February-March) rose 5 cents to $3.08, Forward Look shows.