Uncertainty in long-term weather forecasts, ample supplies and near-record production in the Northeast sent natural gas forwards markets in that region down more than double most other markets for the period between Jan. 29 and Feb. 4, NGI Forward Look data shows. 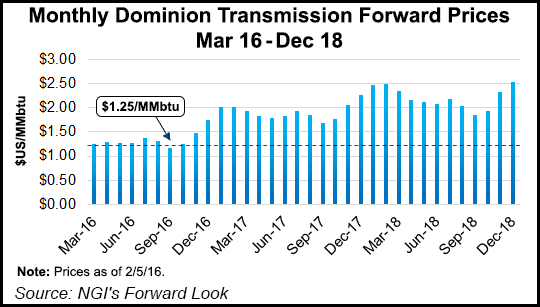 March fixed prices at New England’s Algonquin Gas Transmission citygates tumbled 76.1 cents during that time to reach $3.44, according to Forward Look. April slid 36.6 cents to $2.86, while the balance of summer (May-October) dropped 21.9 cents to $2.70.

While a polar cold front is expected to stall over the region this weekend, weather models remain sketchy beyond next week as the latest data shows a mix of wildly varying solutions.

“Some solutions show cold confined to the far north, but with the cold camp gaining some momentum back in the 8-12 [day] period. However, the data after day 13 is still not cold enough overall,” forecasters with NatGasWeather said.

With plenty of LNG docked and waiting to be unloaded in the region, even chilly forecasts have proven to offer little support to the market.

Both Everett and Northeast Gateway have vessels anchored and waiting to be unloaded.

Interestingly, the region has seen more vessels this winter compared with the previous two winters even as temperatures in the region have run above-average for much of the season.

In fact, the relatively mild conditions have suppressed total New England demand this winter to record low levels of just 2,783 MMcf/d winter-to-date, according to Genscape.

“When this winter’s market temperatures have been within 10-year normals, gas demand for power gen has consumed an average 784 MMcf/d,” according to Rick Margolin, Genscape’s senior natural gas analyst.

“This marks the third consecutive winter where that number has increased. In addition, those volumes are about 30 MMcf/d greater than what a pre-season projection based on average five-year growth trends indicated,” Margolin said.

But the weakness in the gas market wasn’t confined to New England.

Prices in New York also fell considerably for the period between Jan. 29 and Feb. 4 as production remains near all-time highs at just under 23 Bcf/d.

Forward prices across the Dominion curve fared better than other markets, with April falling just 19.4 cents to $1.29 and the balance of summer (May-October) declining 13.1 cents to $1.27.

“Some very big players are trading fixed prices very aggressively. It’s very out of the norm,” a Northeast trader said.

Already, several producers in the region have announced lower capital expenditures for 2016 due to the low gas price environment.

Meanwhile, most other gas markets followed the Nymex, which shed some 32.8 cents between Jan. 29 and Feb. 4 on bearish weather forecasts and a growing storage surplus.

The U.S. Energy Information Administration this week reported a 152 Bcf draw from storage inventories for the week ending Jan. 29, leaving stocks at 2,934 Bcf.

With key demand regions experiencing above-average temperatures this week, several market experts are predicting only a double-digit withdrawal in next week’s storage report.