For the four-day trading week to end the month of January, physical natural gas prices were higher nearly across the board, except for in the Northeast, where prices were in steady retreat following record prices on polar vortex cold the previous week. 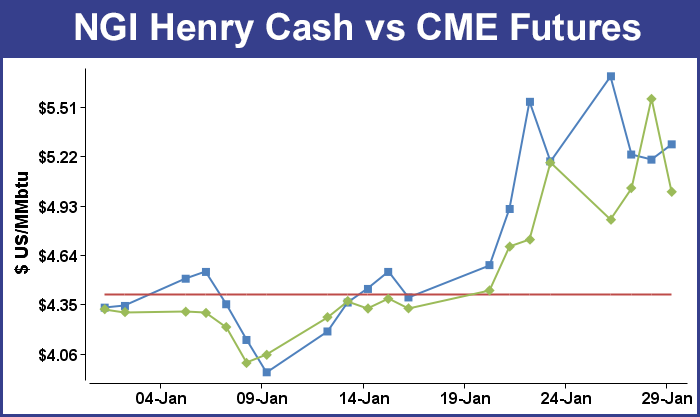 The Northeast as a region dropped $11.07 to average $12.76, with a number of individual points declining anywhere from $20 to $40. The region was enough to tilt NGI‘s National Spot Gas Average into the red, despite all other regions recording gains. For the four trading days ended Thursday, the national average came in at $7.76. down 41 cents from the previous week.

The Midwest and Midcontinent, two regions still within the grasp of well below normal temperatures, saw the largest weekly upticks, with the Midwest adding $6.15 to average $14.20 and the Midcontinent tacking on $2.72 to average $8.53. All other regions added between 20 to 30 cents for the week.

How this recent price volatility will impact February bidweek remains to be seen. “Over the last few weeks we’ve seen prices move in wide swings as these extreme cold fronts seem to arrive every other week,” said a Northeast marketer. “I think storage levels will come into play for a lot of traders seeing as how we now have roughly 450 Bcf less than the five-year average in the ground. I think concern could be growing for end-of-season inventories, and it will be interesting to see whether we get a reprieve from this cold in February.”

March natural gas futures on Friday continued to retreat from Wednesday’s short-covering run-up, leading market watchers to believe that the 52.4-cent jaunt well above $5 was more about the February contract’s termination than it was about current fundamentals. The front-month contract finished the week back below $5 at $4.943, down 6.8 cents from Thursday and 5.5 cents lower than the previous week’s close. The week also witnessed February futures expire Wednesday at $5.557, a new four-year high (Jan 2010).

Futures endured a wild ride for the week after spiking 52.4 cents on Wednesday and then immediately dropping 52.2 cents over Thursday and Friday. After closing Thursday’s regular session at $5.011, the prompt-month contract sank below $5 in overnight trading. During Friday’s regular session, March futures traded a wide range between $4.721 and $4.995.

The Energy Information Administration’s (EIA) 230 Bcf storage withdrawal report for the week ending Jan. 24 only offered up a speedbump to the screen’s decline Thursday as the number was deemed to be inline with expectations. Heading into the report, all expectations were for a withdrawal well in excess of last year’s 191 Bcf pull and the five-year average withdrawal of 162 Bcf. IAF Advisors of Houston calculated a pull of 236 Bcf, and a Reuters poll also showed a 236 Bcf withdrawal. Evans hit the nail on the head with a 230 Bcf draw prediction.

As of Jan. 24, working gas in storage stood at 2,193 Bcf, according to EIA estimates. Stocks are now 637 Bcf less than last year at this time and 437 Bcf below the five-year average of 2,630 Bcf. For the week, the East Region withdrew 124 Bcf, while the Producing Region removed 84 Bcf and the West Region dropped 22 Bcf.

Taking a closer look at the rollercoaster ride that natural gas futures went on during the latter half of the week, analysts warned that volatility, a staple in gas futures during the 1990s and early 2000s, is making a return.

BNP Paribas’ Teri Viswanath said, “It has long been assumed that the dramatic increase in U.S. natural gas resources would prevent high prices and volatility from returning. And yet, this winter has witnessed all-time record high prices for spot gas deliveries, raising questions on whether pipeline constraints have introduced a level of artificial tightness in the industry.”

Tim Evans, an analyst with Citi Futures Perspective in New York, had a similar view. “The natural gas market is continuing to see profit taking focused in the nearby March futures contract, making it look as though the prior strength was more about the February contract expiration than about the colder than normal temperatures that have been draining storage. And while recent forecasts have altered the temperature outlook to some extent, with a bit more cold next week and a bit less in the week to follow, we continue to see enough heating demand to produce above-average storage injections over the next few weeks.”

Evans added that this tightening of the market on a seasonally adjusted basis should continue to reduce downside price risk and add to upside potential. “The trade this week has clearly demonstrated the kind of volatility that is possible here and we wouldn’t rule out a renewed spike to the upside, with a rebound in the March contract back above the $5.00 mark about all it would take to kick that off, in our view.”

David Thompson, executive vice president of Washington, DC-based Powerhouse, told NGI Friday that it was only a matter of time before volatility returned. “For too long, people had lost their fear of natural gas volatility and grown too accustomed to a quiet market. People should never forget that natural gas can do what it can do when you get weather and you’ve converted to a natural gas economy. Look at how much more of a percentage of homes are heated with natural gas now.

“Good old fashioned fundamentals are back. With the amount of gas we’ve burned through in the last month has really opened up some valid discussions that we haven’t had to consider in quite some time. How much will we have in storage at the end of all this and how much will we have to replace to get back up to a satisfactory level when we start considering winter? And oh by the way, what happens if we have a hot summer in between. The amount of gas that has come out is truly staggering.”

Production freeze-offs are still occurring, according to Genscape. For the entire Lower 48 states, freeze-offs collectively offset production by 1.31 Bcf on Friday, although other regions did not have freeze-offs and had production above the Jan. 20 baseline.

Freeze-offs are another part of the equation, Thompson said. “We all know through the shale plays that we have huge gas reservoirs, but when you are talking about getting [storage] down to levels that potentially could threaten the operational integrity of the pipeline and storage systems, that’s another story. You can’t withdraw to zero. You can’t get close to zero even because you need to have pressure in the caverns and obviously in the pipeline system. What we have now is extreme cold using up a lot of gas, but that extended cold is also causing freeze-offs in production that might be used to replace gas volumes, so we’re certainly living in interesting times.”

Thompson added that he believes the current dynamic is that physical gas prices are leading futures around, and the wide swings in physical prices could lead to an interesting February bidweek. “When you look at the number of gas customers who have been interrupted this month, which spills over into other energy markets, it is surprising,” Thompson said. “I suspect the level of interruptible customers has been at record numbers, so the question is how long does that last for? In the past interruptibles might have been a relatively short time phenomenon. Will this be longer than previous historical episodes?”

End-of-season storage levels continue to be a hot topic amongst market watchers.

Barclay’s Analyst Shiyang Wang has similar concerns for storage, especially considering the current level of freeze-offs. “Given the six-15 day weather forecast, little [freeze-off] recovery could be expected unless normal or warmer weather occurs in the second half of February. Although there are only two months left for this winter season, storage withdrawals could still see large variations depending on weather trends. March alone, for instance, could swing from a small injection to a withdrawal greater than 380 Bcf.

“All eyes remain on the weather forecast for the rest of the season, which can swing drastically from one day to another. Given the current weather forecasts for the first half of February, we highlight downside risks to our end-of-season storage forecast of 1.4 Tcf.”

With the latest polar vortex now firmly in the rearview mirror, physical gas prices also continued to recede at a majority of points across the country on Friday, except in New England and the Midwest, where much below normal temperatures still linger.

Algonquin Citygates saw one of the biggest increases, adding 77 cents to average $11.34 on Friday for gas to be delivered over the weekend and on Monday. In the Midwest, Chicago Citygate picked up 52 cents to average $6.96, while Consumers Energy added 32 cents to $7.12.

Out of the woods for the most part in terms of extreme cold, locations south of New England continued to decline. Tennessee Zone 4 Marcellus dropped $1.08 to average $2.08, while Transco Zone 6 NY declined by 60 cents to average $5.75.

Most Rockies and California points came off by a dime to 20 cents, and along the Gulf Coast, the Henry Hub was coming nearly inline with front-month futures. On Friday for weekend and Monday delivery, the Henry Hub fell 28 cents to average $5.01, within a stone’s throw of the March contract’s $4.943 close.