A multi-year effort to add natural gas pipeline capacity from Appalachia to New England and Eastern Canada has hit a roadblock in Massachusetts, with Maine businesses crying for a resolution to bring relief for large electricity consumers. 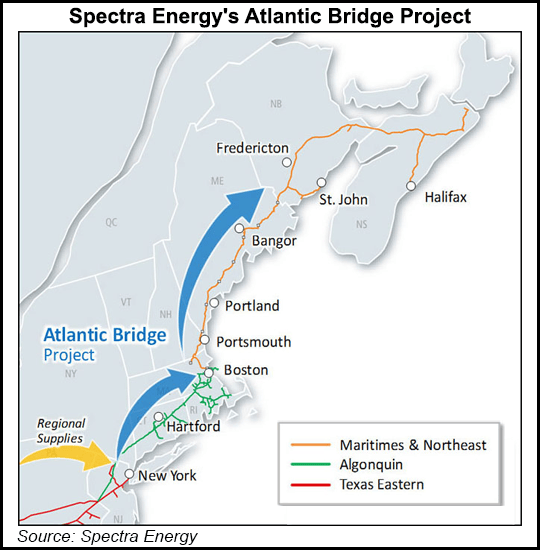 In play is the $452 million Atlantic Bridge expansion project by Algonquin Gas Transmission LLC and affiliates. It was built in phases in New York and Connecticut but has hit a wall of opposition in Weymouth, MA, where a compressor station is slated to be built. The transmission system would traverse the Northeast and also carry gas to Nova Scotia.

“It is partially in service in segments,” said Northeast Gas Association’s Stephen Leahy, vice president for policy analysis. He said a major sticking point in Massachusetts centers on air permits.

Despite the controversy, Leahy noted that the project is relatively modest and would use existing rights-of-way. It would add up to 133 MMcf/d through the corridor and into Canada.

Declining gas supplies from offshore Eastern Canada and rising U.S. supplies in the Marcellus and Utica shales have triggered the need for more pipeline capacity.

“There have been price spikes on the electricity side that have been tied to gas price volatility so regional energy officials have had a two-prong strategy — building out electric transmission for ”clean’ energy by creating more interconnects with Canadian hydropower sources, and carrying out a regional gas pipeline buildout,” Leahy said.

Shippers are mainly utilities and larger commercial and industrial customers.

Atlantic Bridge originally was scheduled to start up last November. Leahy said about 40 MMcf/d is in service in Connecticut, and construction has begun in New York, which should be completed later this year.

Price spikes from the winter storm that hit the region earlier this week drove up the five-minute spot price to more than $1,800/MWh on Tuesday, driven by a major transmission line that tripped and a loss of up to 1,200 MW of gas-fired generation, according to data tracked by Genscape Inc.

Meanwhile, the proposed compressor station to increase gas pipeline capacity in Weymouth is getting push back because of perceived environmental and health issues, Leahy said. Construction on this phase of Atlantic Bridge has been stalled by legal action, which extends the timeline to complete the upgrades into the middle of 2019.