At first glance NGI Weekly Spot Gas Prices look like a sea of red ink, but upon closer inspection widespread losses primarily in Producing Zones of a nickel to a dime were offset by stout double digit advances in the Northeast. The NGI Weekly Spot Gas Average came in a penny higher at $3.42. 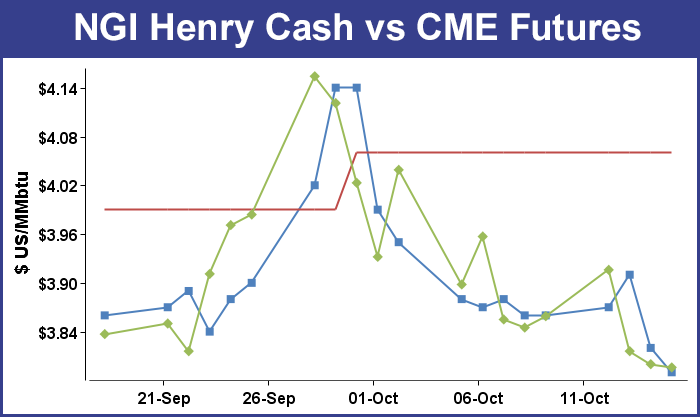 The Northeast sported most of the week’s gainers, and behind Iroquois Zone 2 were Iroquois Waddington with a 55-cent gain to $3.92 and Algonquin Citygates with a 48 cent advance to $3.15. Only 3 points in the Northeast endured losses. Lebanon was the biggest northeast loser with a drop of 8 cents to $3.76 followed by Columbia Gas and Transco Zone 5 with losses of 7 cents to $3.72 and $3.82, respectively.

The Energy Information Administration (EIA) reported a storage build of 94 Bcf, somewhat higher than market expectations and prices fell initially only to recover to unchanged on the day. At the close November was 0.4 cents lower at $3.796 and December was unchanged at $3.885.

The week’s builds were forecast to be the first week in the last 12 that didn’t break the triple-digit threshold. The year-on-five-year deficit, nonetheless continued to contract. Last year, 79 Bcf was injected, and the five-year average is a 78 Bcf increase. Analysts at United ICAP predicted an 87 Bcf build, and First Enercast was looking for an 86 Bcf injection. A Reuters poll of 25 traders and analysts resulted in a 91 Bcf average with a range of 78-106 Bcf.

Bentek Energy’s flow model figured on a 90 Bcf injection. “The expected injection brings inventories close to 3.3 Tcf by only the second week of October, and similar weather for the next few weeks makes peaking above 3.5 Tcf by the end of the month more likely as seasonally strong injections are expected to continue for at least the next two weeks and potentially into November,” Bentek said. “Residential and commercial demand reached its highest level since early May and averaged 16.5 Bcf/d during the week, which was an increase of 4.1 Bcf/d from the previous week. The uptick in residential and commercial was partly offset by declining power burn demand, which fell 0.8 Bcf/d week-over-week to average 22.3 Bcf/d.”

“The market is pretty much trading where it was before the number came out. We moved 4 cents down and now we are right back to where we were,” said a New York floor trader.

“Natural gas is a pretty tame market right now. Everyone is following oil.”

At Citi Futures Perspective analysts saw the figure as “a moderately bearish surprise. The build was also more than our weather-based model had projected, which will translate into higher rates of injections going forward,” said analyst Tim Evans. “It looks as though the background supply/demand balance is at least slightly weaker than the recent flows had suggested.”

Inventories now stand at 3,299 Bcf and are 344 Bcf less than last year and 362 Bcf below the 5-year average. In the East Region 49 Bcf were injected and the West Region saw inventories increase by 10 Bcf. Stocks in the Producing Region rose by 35 Bcf.

“The EIA reported an injection of 94 Bcf versus market expectations of 88-90 BCF for the past week,” said Phillip Golden, director of risk and product management at Energy Market Exchange (EMEX) in Houston. “This bearish report immediately turned the gas market down $0.02/MMBtu, which is a mildly bearish move. This further suggests that we are near or at a floor as a bearish injection this late in the season would typically produce a greater a greater downward move in the market.”

Despite the bearish news, Golden said the winter temperature outlook should give bulls hope. “A recent winter weather forecast issued by Accuweather coincides with the Farmer’s Alamanac outlook for this winter, mainly that there will be below-normal temperatures through the Mid-Atlantic and Mid-West again this winter,” he said. “As EMEX has previously advised, clients should be looking to lock in their gas for this coming winter in the next 2-4 weeks to avoid potential price spikes like we saw last winter.”

Looking ahead, Golden said the industry will need injection numbers of 42 Bcf/week to refill storage to the levels expected by the Energy Information Administration, and to get to the high of 2012 we would need to average 203 Bcf/week. “We are not going to reach either the high levels of 2012 levels nor are we going to be at the same level as last year,” he said.

EMEX projects that natural gas at the end of the injection season Nov. 1 will come in right around 3,550 Bcf, which will be the lowest level since 2008, when the country entered the winter with storage at just over 3,400 Bcf. “If we were to revert back to historical averages, we would end this injection season at just over 3,450 Bcf, which would be a very nice recovery from this past winter,” Golden added.

If there were concerns that the high pace ofinjections might come to a halt sometime soon, it will not be because of increased heating and cooling requirements. The National Weather Service expects well below normal degree day (DD) accumulations for the week of Oct. 18, which should impact next week’s storage figures. Combined heating and cooling degree days in New England are anticipated to be 50, or a stout 54 DD below normal. The Mid-Atlantic is forecast to see 34 DD, or 56 fewer than its seasonal tally. The greater Midwest from Ohio to Wisconsin is set to “enjoy” 47 DD, or 48 fewer than normal.

Top traders are cautiously long the market with a tight stop. “Although our storage expectation was far off the mark given [Thursday’s] 94 Bcf injection, the market’s upside recovery after posting another round of fresh lows reinforces our short-term bullish convictions. For now, we are staying with the program of maintaining any long positions by keeping stops below $3.77 close only in referencing the spot month,” said Jim Ritterbusch of Ritterbusch and Associates in closing comments Thursday to clients.

“The short-term temperature views don’t appear sufficiently bearish to sustain price declines south of the $3.80 level, and we will look for the money managers to do some short-covering [Friday] ahead of a weekend that could bring some shifts in the weather outlooks. The supply surplus against five-year averages has now been cut to below 10%, and although we were off the mark in our storage injection for last week, the size of [Thursday’s] increase fortifies our opinion of a storage peak near 3.6 Tcf that will likely be established later next month. All factors considered, we still view this market as trading at or near the low side of what we expect to be about a 40-cent range when looking out over the next two- to three-week time period,” Ritterbusch said.

In Friday’s trading gas buyers for weekend and Monday packages were not persuaded to commit to three-day deals in spite of a combination of active weather, temperatures below seasonal norms and a firm power market.

Only a couple of points made it into the black, and losses of a nickel to a dime were common with the Mid-Atlantic and the Northeast enduring double-digit declines. Appalachian locations and the Marcellus lost about a dime, and producing regions were lower by over a nickel. Futures settled lower on light volume and came within a hair of long-term technical support. At the close, November was off 3.0 cents to $3.766 and December had fallen 2.2 cents to $3.863. November crude oil gained 5 cents to $82.75/bbl.

The midsection of the country was expected to see a number of weather systems march through, and with a plethora of communications devices available, traders can respond to weather changes quickly and make spot purchases when necessary.

“An area of low pressure will affect the Northeast on Friday, while a separate system will drift over the upper Midwest,” said Kari Strenfel, Wunderground.com meteorologist. “A strong low-pressure system will continue to lift northeastward over southeast Canada. This system will usher moderate to heavy rain across portions of New England on Friday. To the south, a high-pressure system will develop over the Gulf Coast, bringing warm, dry conditions to the Deep South, the Southeast, the Tennessee Valley and the Mid-Atlantic.

“Meanwhile, a separate area of low pressure will shift eastward over the upper Midwest. As this system moves over the region, it will push showers across the upper Mississippi Valley, the Great Lakes and the northern tier of the Ohio Valley. Conditions will remain mostly clear across the Plains. To the west, a weak area of low pressure will bring a slight chance of showers to the desert Southwest, including parts of eastern Arizona and western New Mexico.

“Another round of rain will develop over the northwestern corner of the country as a cold front approaches the West Coast,” she said. “Rainy weather will spread across northern California, Oregon, Washington and the upper Intermountain West. High-elevation snow showers will be possible during Friday evening over the northern Rockies. The Great Basin will stay warm and dry on Friday.”

If forecasts from Appalachian producers are any indication, sustained production growth is likely for years to come. According to industry consultant Genscape, “Antero Resources — one of the largest producers in Appalachia — said in a Q3 operations update that it expects Marcellus and Utica production will continue growing due to strong hedges, advances in drilling technology, a growing inventory of wells, high IP rates, and increased market accessibility [see Shale Daily, Oct. 16]. Antero noted its Q3 production exceeded 1 Bcf/d (gas equivalent) for the first time, representing a 21% increase from its Q2 output, and 91% greater than Q3 2013. The company expects production through 2016 to grow by 50%, with as much as 1.07 Bcf/d of 2018 volumes hedged, with hedged prices reaching as much as $4.79 (2015 volumes).”

Genscape reported that, “The production growth is being facilitated by high IP rates (as much as 56 MMcf/d in the Utica) and use of ‘shorter stage-length’ completions (SSL), which enhance production by 20-30% relative to non-SSL wells.”

Weather forecasts changed little overnight, and Commodity Weather Group in its Friday morning six- to 10-day outlook showed above-normal temperatures over the northwest one-third of the country with a modest accumulation of below-normal temperatures along the southeast U.S. trending from New Orleans to Norfolk. “A stalled upper-level trough next week along the East Coast continues to offer modest cool risks to the forecast for especially the East Coast, but it does cool the eastern Midwest and Southeast a bit more early in the six-10 day,” said Matt Rogers, president of the firm.

“Otherwise, the pattern is still a variable one with more seasonal to warm ranges than not. The overnight guidance was mostly about the same or warmer than prior runs with still a very mixed Pacific picture that keeps the situation more complicated and uncertain. For the 11-15 day, about 36% of the European ensemble members show a cooler-than-normal period for the Midwest, East and South, while 64% of its members show a seasonal to warmer story. We continue to stake out the middle ground as it looks like there is room for at least some transient weak cooling mid to late period, but still no significant cold air connection to justify a stronger impact at this point.”