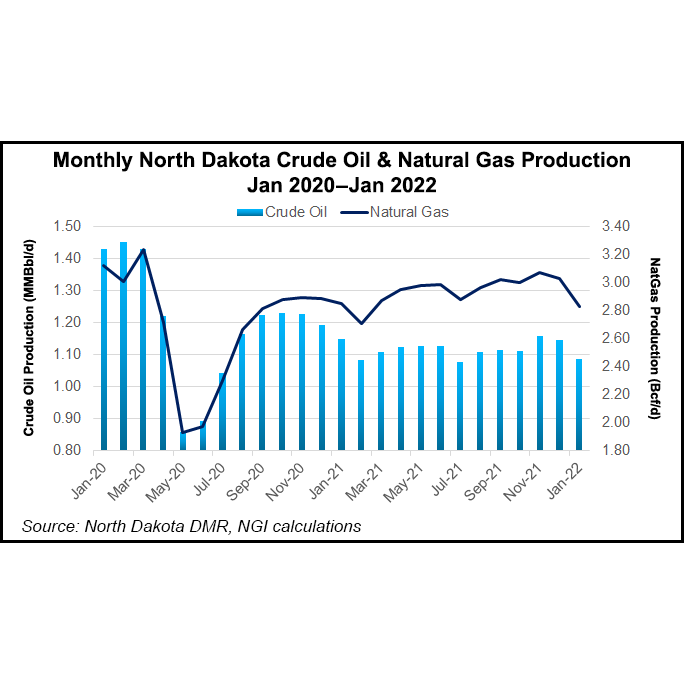 U.S. operators are in position to replace about 750,000 b/d or so of the roughly 5 million b/d of Russian oil exports subject to sanctions amid the war in Ukraine, Helms estimated. However, this will likely take 12-18 months.

“I would say the No. 1 reason that it will take so long to ramp up U.S. production is going to be workforce,” Helms said. “The supply chain is badly broken. The workforce isn’t there.” Labor shortages and a shortfall in critical materials such as fracturing sand, are preventing a rapid supply response as storage and drilled but uncompleted (DUC) well inventories continue to draw down, Helms said.

The No. 2 cause, he said, is that “people are really unwilling to take the risk of massive investment at this point in an industry” that climate hawks say must wind down substantially by 2050.

Helms said that “the regulations and the policies of the federal administration are completely counter-current to ramping up U.S. production.” He cited the Biden administration’s resistance to granting new leases and drilling permits on federal property.

“We, over the last year, have seen a number of oil and gas cases put in front of us where wells could be drilled immediately if federal leases were made available,” he said. There are more than 800 tracts nominated for pending federal lease sales in North Dakota, he said, of which 242 could be leased immediately.

“And if those were leased, we know of at least 100 wells that would be drilled this year on those leases,” Helms said. In total, the federal government is blocking slightly less than  1,100 wells from being drilled in North Dakota, the regulator said.

“Some of those are incredibly productive areas” that “would provide a really significant, immediate target for our oil and gas operators.” Most of the tracts are nominated by privately held companies.

Privately held exploration and production companies working in North Dakota have returned almost to pre-pandemic drilling levels while their publicly traded counterparts are “not even close,” Helms said. “And so it’s the publicly traded companies that seem to be under this significant investor pressure.”

The private operators “are prepared to go drill” the nominated wells this year, Helms said. However, “I just don’t see us getting those lease sales done under the current environment. But that would make a significant difference.” Those lease sales could add 50,000-100,000 b/d to North Dakota’s oil production, Helms said, “if we could break that logjam.”

Why Did Production Plunge In January?

“One would think that North Dakota operators would always be prepared for winter, but that wasn’t the case,” Helms said. After two mild winters in a row, “when the really cold weather came at Christmastime and held on through the whole month of January, we saw…a lot of freeze-offs, a lot of problems with the gas gathering and processing infrastructure, and even power problems within that infrastructure.”

As a result, oil companies, “in sticking to their flaring targets” and environmental, social and governance goals, “shut wells in, reduced production, limited their production [and] didn’t complete wells,” Helms said. North Dakota operators recorded a 93% gas capture rate in January, down from 94% in December.

Recent permitting levels for oil and gas drilling have been “pretty anemic,” with 39 wells permitted in January and 32 in February. “Those are not production-sustaining levels,” Helms said.

“The needle hasn’t moved” on drilling activity, Helms said. While he had expected the state’s operators to add a dozen or so rigs this year, “I’ve really dialed those expectations back, and I’m hopeful they can add a half a dozen.”

Amid the labor and materials shortage, companies “are aggressively pursuing” the DUC wells, Helms said. It’s turning out to be much easier for operators to add completion/fracturing crews than drilling crews, “so that really is what we’re counting on for 2022.”

North Dakota’s tally of wells waiting on completion stood at 449 for January, down from 475 in December.