North Dakota’s robust Bakken Shale hasn’t reached its all-time low points for rig count and well shut-ins, but it will be there soon enough, the state’s chief oil/natural gas regulator Lynn Helms said Tuesday during a report on the latest monthly production statistics. 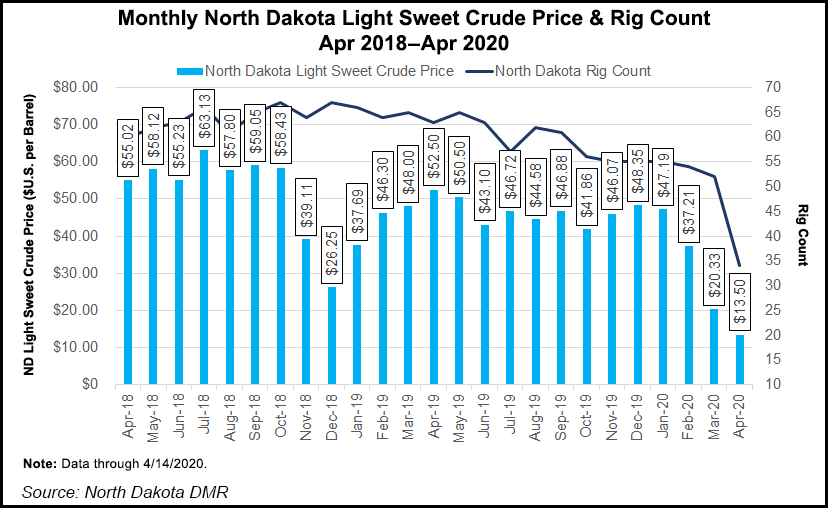 Offering data from February just ahead of the full force of the coronavirus lockdown and the global oil meltdown, Helms, director of the Department of Mineral Resources, said “the data we’re looking at are two months old, and a great deal has happened since then, but my remarks will try to be more contemporary.”

Production for oil and gas on an average daily basis continued to increase back then, including a 6.4% jump in gas production and an increase in gas capture to 87%. Turning to rig count, Helms said about 40% of the state’s rigs were lost in “three short weeks,” settling on Tuesday at 34 after holding in the low to mid-50s for several months.

“This has all come since the Covid-19 onslaught and the plummeting of world energy demand,” Helms said. The director added that his office is seeing a “tremendous volume” of applications for uncompleted well and inactive well waivers, with a massive number of these requests expected in the months ahead.

Industry and operator sources are predicting rig counts to drop by 50%-75% in the next three months, which Helms said would result in a Bakken rig count in the upper 20s, around the state’s all-time low since the shale revolution hit 12 years ago.

Layoffs now are about 2,200, but Helms said the jobless number could get much bigger — 8,000-8,500 — before the situation turns around. “Analysts’ projections are showing that liquid fuel demand still hasn’t bottomed out and will decline through the first half of May,” he said.

Helms said that North Dakota had more than 16,000 active wells at the beginning of March and ended the month with 3,600 less wells operating, a clear example of the combined impact from the virus and global oil supply glut.

The industry appears to be taking advantage of the regulatory relief of the expanded waivers that was established last month by the North Dakota Industrial Commission headed by the governor.

Helms sees the earliest relief coming globally in the fourth quarter because that is when the production cutbacks by the Organization of the Petroleum Exporting Countries and its allies should result in demand again exceeding supply. “That should begin to empty out storage and begin to make a difference in prices, but it will not immediately bring drilling rigs back,” he said.