Bakken Shale oil and natural gas production declined in September but North Dakota’s top oil and gas regulator said Tuesday the numbers could reverse in the next report covering October. 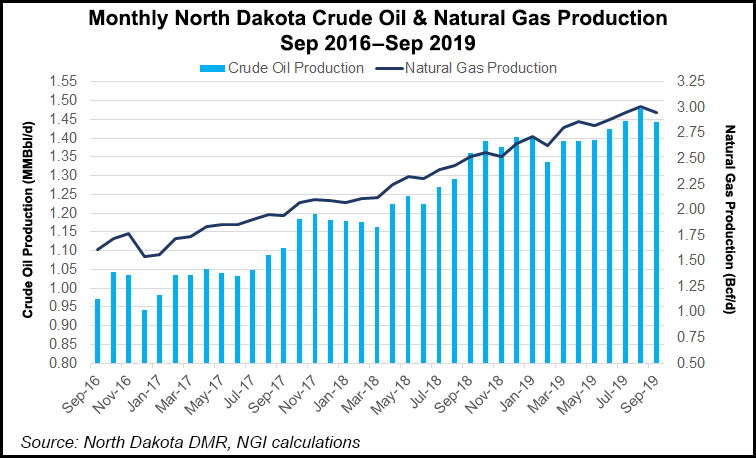 Two weeks of continuous rains in September stunted production, said Department of Mineral Resources director Lynn Helms. He said during a webinar that the rig count also was variable as operators shifted to incremental increases based on oil prices, available capital and gas capture. Another issue is competing with the other Lower 48 basins, including the Permian and Anadarko, Helms said.

There were 2,104 idle wells in September, compared to 1,675 in August. The number of completed wells also continued to drop to under 100 in September. However, producing wells reached a record 16,099.

A slight improvement was seen in reducing the percentage of flared gas at the wellhead with captured volumes reaching 82% in September, compared to 81% in August, with captured volumes totaling 72.8 Bcf. Operations on the Fort Berthold Reservation, which accounts for more than one-quarter of the Bakken production, continued to lag behind the rest of the state on gas capture at 79%.

Helms said recent Bakken crude oil prices on average have begun to approach September levels, hitting $46.75/bbl on Tuesday, compared to $41.86/bbl in October. However, the rig count has been dropping, settling at 55 on Tuesday from 59 in October and 61 in August.