Although Bakken Shale oil and natural gas prices in North Dakota have begun to recover, production continues to plummet at a historic pace, according to Department of Mineral Resources director Lynn Helms. 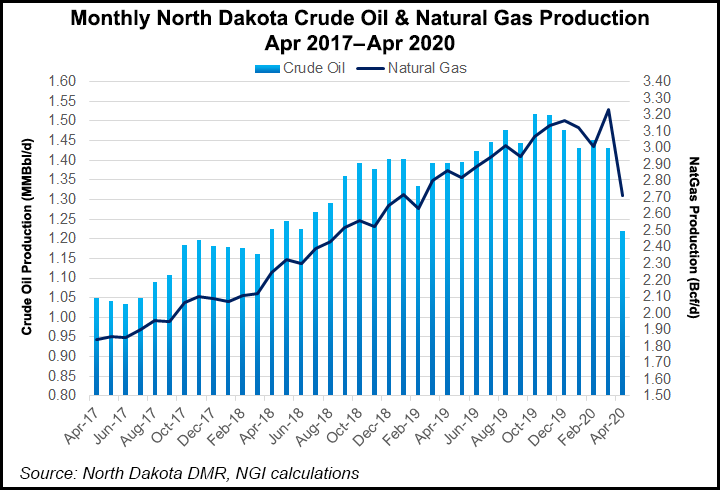 Oil production fell by 15% and gas output was down 13% in April month/month, the largest one-month decreases ever in April, Helms said last Friday. Oil production tallies are expected to dip below 1 million b/d in May.

“These are the largest declines ever in both absolute and percentage terms, and we actually expect May to be worse,” said Helms. “We’re looking at the week of May 16-23, when it appears to us there was an added 300,000 b/d reduction, and that will be a larger percentage drop than we had in March to April.”

Since March, the state’s rig count is down 82%, hitting about 10 on Friday, and Helms anticipates it is “very likely” the count will go into single digits. Well completions also are down substantially, hitting 68 in April, and completion crews are down 96% with one crew operating.

There has been a small increase in inactive wells, but Helms said the statistic was a puzzle. “What we have determined from our oil/gas operators is that if a well is only operated a few hours daily, it can be considered a shut-in, but not inactive.

“So the oil and gas engineers took a look at shutting all of these wells and figured out that in the Bakken if you shut-in a well and leave it down for months, it is going to be very expensive to return it to production. In many cases they are just pumping these wells an hour or two each day. So the mechanical system stays in working condition, but they produce very little oil with a lot of water.”

On a positive note, there were 62 permits issued in April and 59 in May, “below the levels we would like to see, but it does indicate that our operators believe in the Bakken resources, and they intend to stay and intend to have a 12-month supply of permits so when they intend to ramp up they can make that happen,” Helms said.

Gas capture reached 88% statewide, and it topped 91% outside Fort Berthold portions of the Bakken. Meanwhile, the rate on Fort Berthold was 85%.