Oil and natural gas production in North Dakota, home to the Bakken Shale, rose in September over August. 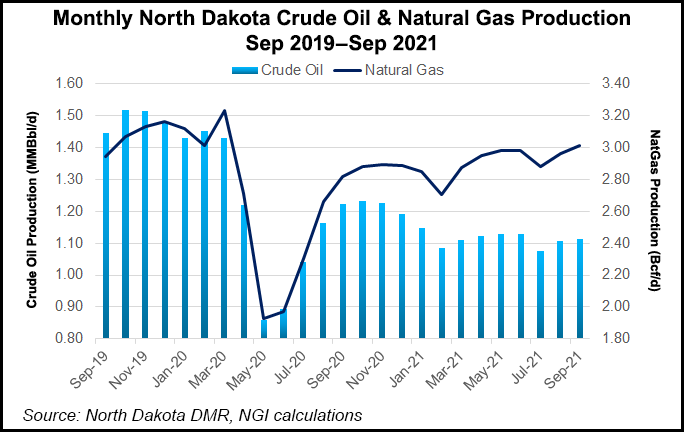 Department of Mineral Resources (DMR) director Lynn Helms issued the monthly Director’s Cut on Tuesday, which provides information about all of the wells capable of producing, as well as permit activity.

Natural gas production in September averaged 3.02 Bcf/d, according to DMR. This compares to 2.96 Bcf/d in the previous month.

Gas capture also improved in September, when it hit 94%, compared to 92% in the previous month. North Dakota has set a gas capture goal to keep flaring/venting at 8% of production or less.

Helms said the 94% figure was “good news,” but October was a “tough month with three weeks of downtime on the Northern Border Pipeline. So October could be a downer.”

Helms added that “we’re back into that mode where natural gas production is growing much more than oil.”

Oil production also rose month/month to 1.113 million b/d, from 1.017 million b/d in August. The Bakken and Three Forks formations made up 96% of the production figure.

The rig count, meanwhile, continues to rise from the hit it took last year. As of Tuesday, the North Dakota rig count stood at 34, compared to an average of 27 in September. Helms noted that the rig count is the best it has been since the pandemic hit in the state.

Based on a preliminary estimate, 17,041 wells were producing in September, an all-time state high. Thirty-four wells also were completed in September, down by 13 month/month.

Permits issued to drill fell in September to 69 from 79, Helms noted. In October, the state issued 37 permits to drill. Helms said the October figure is “inadequate” to grow and sustain production.

The passing of the infrastructure bill would help the state locate, document and plug idle and orphaned wells, according to Helms. The legislation would provide up to $25 million per state each year through 2030 in the effort. The state is “busy getting ready to apply” for the grants and “we are really excited about that,” he said.

North Dakota has 557 documented abandoned wells, or about 300 idle or orphaned wells, Helms said. But, “you never know what you are going to get.”

There are also plans to convert some abandoned wells into water wells to help with drought relief for livestock or into domestic water wells in western North Dakota, Helms added.