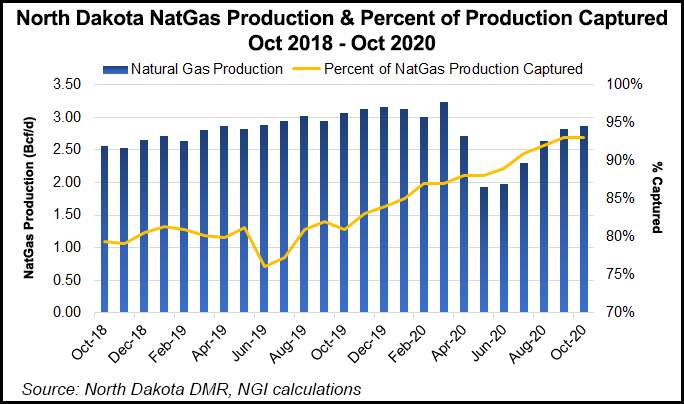 Department of Mineral Resources director Lynn Helms noted that recent Bakken Shale sweet crude was trading at around $43.50/bbl, which should spur more well completions, but not high enough to increase the rig count.

A recent wind storm eliminated up to 75,000 b/d of oil production and well completions declined in December, but with wintry weather ahead “we’re probably going to see a downward trend in production,” Helms said.

“On the other hand, prices are significantly better with a $6/bbl increase in North Dakota light sweet crude,” and with West Texas Intermediate “up by about $5/bbl.”

Hydraulic fracturing crews are down to about three, and are likely to fall to only one or two in February, he said.

A gradual decline in oil production this year is expected, to 1-1.1 million b/d, before climbing back to 1.2 million b/d in early 2022.

Drilling rigs were down to 11, with six on federal lands and the Fort Berthold Reservation.

According to Helms, there are “ongoing concerns” about whether the incoming Biden administration will limit permitting and unconventional drilling on federal lands.

Fort Berthold rigs were down by two, but production was up in November by 5,500 b/d. Helms said there are concerns about 2,893 future well sites on trust lands.

“We anticipate a negative impact on those slots but we can’t really quantify that,” he said of the incoming administration. President-elect Biden has indicated he could limit drilling on federal lands.

Gas capture remained steady in November at 93%, although Fort Berthold still lagged at 89%.  Additional help is expected with a new processing plant and two others coming online later this year.

The new plant and related 80-mile 20- and 24-inch diameter rich gas gathering system is west of Williston. The plant has market access to the Northern Border Pipeline system for residue gas and a Oneok natural gas liquids pipeline system.

“They pushed through with the plant even with the Covid-19 pandemic,” Helms said of the Sanderson plant. “There is a significant bottleneck for gas gathering/processing north of the lake, so this is really going to help, particularly for their main customer,” ExxonMobil’s XTO Energy Inc., which operates two units in the area.