When considering the increased rate that wells are getting connected to gathering pipeline systems, North Dakota is “turning the corner” on the volumes of natural gas flaring despite the relatively high percentage of associated gas that is still being burned at the wellhead, state officials told NGI‘s Shale Daily. 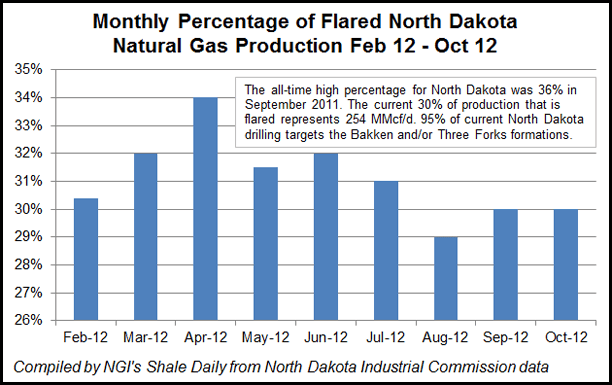 Coming off the most recent report from the state oil/gas division that indicated flaring was stuck at 30% as of the end of October, North Dakota Pipeline Authority Director Justin Kringstad said things are getting better because more wells are getting connected faster these days as production continues to climb.

As of the most recent reporting period for oil/gas data at the end of October, there were 1,468 new wells connected, said Kringstad, noting that in October alone 153 new wells were connected, compared to 109 for the same month last year.

The current 30% of gas being flared represents 254 MMcf/d, according to the spokesperson in the Department of Mineral Resources (DMR). “We are still seeing a trend downward, even though it’s slight,” the spokesperson said. “There won’t be a sharp drop-off; it’s going to stair-step down from (DMR Director Lynn) Helms’ best estimates for the next decade.”

Kringstad said there is another several hundred million cubic feet per-day of processing plant capacity either under construction or planned to start construction early next year. “The biggest challenge regarding gas flaring to make an impact is to continue to get wells connected,” he said.

Charting of the connections showed a real steep increase this year, according to Kringstad, who said the state was getting ahead of the curve on flaring.

“The more companies continue to invest and build, the quicker we can see [the flaring numbers] continue to go down,” said the DMR spokesperson. “There is going to be a real push this upcoming legislative session to see what can be done to continue to curb flaring.”