In what could become a major regulatory jurisdictional, if not legal, dispute, the three affiliated tribes on North Dakota’s Fort Berthold Reservation — Mandan, Hidatsa and Arikara (MHA) — have outlined plans for imposing a fee on the amounts of wellhead flared wet gas coming from the booming Bakken shale oil production on the reservation. 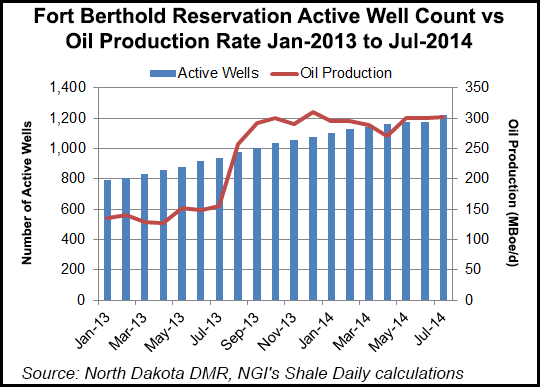 Currently, about a third of North Dakota’s more than 1-million-b/d production comes from operators on the Native American lands that are under U.S. Bureau of Land Management (BLM) oversight.

The North Dakota Department of Mineral Resources (DMR) are scheduled to meet Tuesday with tribal representatives, a DMR spokesperson in Bismarck told NGI‘s Shale Daily. “We are aware that the regulatory office within the reservation has developed their own flaring policy, although we have not yet seen the written policy,” she said.

The fee proposal was made in a seven-page communication that the tribes sent to oil/gas operators on the reservation. Calls by Shale Daily to the tribes’ energy and business development offices Friday were not returned.

MHA’s proposal seeks to ensure that flared gas is measured and royalties paid. The tribes believe that “operators will actively initiate gas capture plans when they have the motivation of paying royalties on flared gas,” according to the proposal. It seeks to allow operators “to work out their best method of preventing flaring on their acreage.”

North Dakota Petroleum Council (NDPC) officials question if the Native American affiliated tribes under the MHA Nation have the authority to impose a fee. An NDPC spokesperson told Shale Daily that the producers group will wait for state and MHA officials “to work out the regulatory authority” before the council will comment any further.

In the past, NDPC officials have cited the fact that the MHA tribes signed a tax agreement in 2008, assigning power over oil production on the reservation to the state. That agreement, signed in the early stages of the Bakken oil boom, cleared the way for various exploration/production (E&P) companies to drill on Fort Berthold. Before that, E&Ps were hesitant to do that because of potential tax and other liabilities.

NDPC President Ron Ness was quoted by the Associated Press as saying he hopes the state and the tribes can agree on who holds regulatory authority in the case. Other industry representatives indicated flaring fees on the reservation could eventually lead to a drop in production and a disincentive for drilling new wells there.

MHA’s proposal, labeled a “Gas Capture Plan Concept,” noted that the tribes have the foundation for their own gas capture plan as part of rules for Fort Berthold that have existed for decades, but there are questions about their effectiveness. The tribes have had federal rules covering “royalty or compensation for oil/gas lost” under BLM notices (NLT-4A) related to federal and Indian onshore oil/gas leases.

The BLM notice covers “avoidable lost production” through venting or flaring of gas without prior authorization. MHA is now saying that the BLM rules are incomplete and the tribes are recommending “additional documentation and oversight.”

“Specifically, flaring plans should have specific performance requirements that are reviewed quarterly to ensure steps can be made to stop flaring,” the seven-page document said. Part of the tribes’ proposed plan would include a new permitting process that requires “operators to formulate the management of produced gas in a manner that ensures the gas is processed through a pipeline system and that the maximum value of that gas is provided to the tribe(s).”

Tribal gas capture requirements would be effective 60 days after the Tribal Council approves them. The final approval date allows flexibility for the council to approve the gas capture plan, for industry to respond, to make additional adjustments, if necessary, and to approve any final changes, the MHA concept document said.

The tribes have been raising their profile regarding oil/gas operations as production has rapidly climbed (see Shale Daily, April 28). In May, BLM agreed informally that new state anti-flaring rules would be enforced on the federally managed lands (see Shale Daily, May 15). The three affiliated tribes also had established rules for Fort Berthold that were considered similar to those that North Dakota’s Industrial Commission put in place this year on effect June 1 (see Shale Daily, June 2).

Oil production at Fort Berthold has remained near 300 Mboe/d since Sept. 2013, though the number of active wells there has climbed from 1,004 to 1,220 over the same period, according to DMR data.