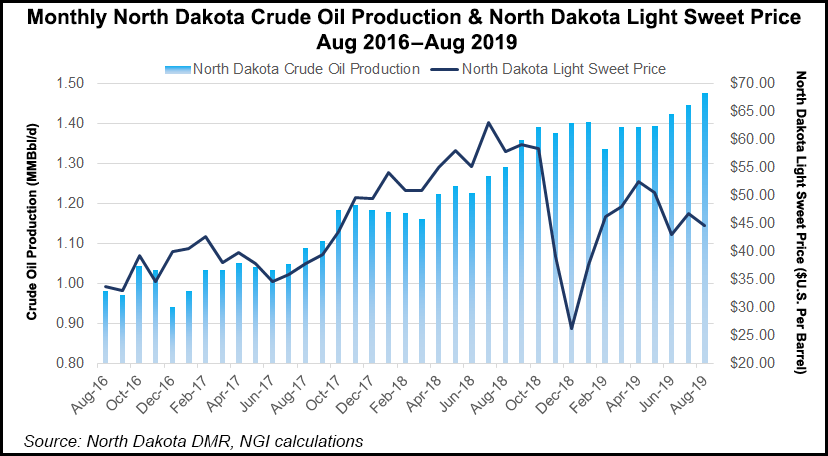 Natural gas production was a record 93.4 Bcf (3.01 Bcf/d) in August, a 2.3% increase month/month, “the first time we have ever averaged more than 3 Bcf/d,” Department of Mineral Resources director Lynn Helms said during the monthly webinar Thursday.

He said 1 Bcf may get “ lost on people, but that is an enormous number. I think that is a really important milestone.”

Rig workover activity increased sharply, too, Helms said, and gas capture statewide had fallen back to 81%, but it lagged in the Fort Berthold Reservation operations, where oil production increased to 335,475 b/d.

Gas capture volumes were up at 75.5 Bcf (2.43 Bcf/d) in August, compared with 70.4 Bcf (2.27 Bcf/d) in July. The percentages for Fort Berthold were 75%, with wells awaiting completion at 161. Fort Berthold well completions have risen as the region awaits more infrastructure. Completion delays amount to about 32,000 b/d of not being produced, Helm said.

“Had we all the infrastructure in place to capture the gas and complete the wells, we would have been easily at more than 1.5 million b/d of production,” Helms said.

“In August, we had two facilities totaling close to 320 MMcf/d of added capacity start operations, and in looking forward, there are still seven processing facilities on the radar, two scheduled to come online before the end of this year,” he said.