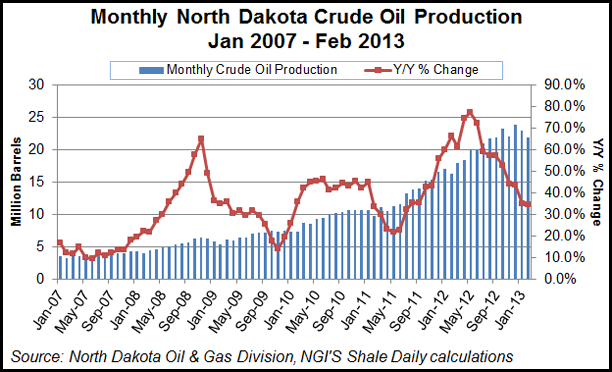 A footnote to the most recent monthly report detailing February performance also cited the fact the natural gas production is increasing at a faster rate than oil, according to state officials Even with the continuing low prices, gas production increased 7.4%, compared with a 5.6% jump for oil.

Production rates and producing wells were at record levels. “The number of completions [of wells] is well above the threshold needed to maintain production as the oil production rate rose sharply — up 5.6% from January,” said Lynn Helms, director of North Dakota’s Department of Mineral Resources (DMR).

Helms reiterated that nearly all (95%) of the drilling in his state targets the Bakken and Three Forks shale formations.

Producing wells also reached an all-time high in February at 8,492, compared to 8,342 in January.

Helms called February weather “more normal” with no major storms or extreme temperatures and wind chills, which can adversely impact production. “Even though the drilling rig count dropped slightly, the number of well completions doubled to 170,” he said.

On a webcast Tuesday, Helms said the recent storms last month and Monday will keep road restrictions in effective throughout the state until early May, so he doesn’t expect the state to return to full production until probably June.

He said drilling permit totals for March returned to more “normal” levels, hitting 218 for the month, equalling January and well above February levels when only 185 permits were issued.

“We have a sufficient permit inventory to accommodate multi-well pads,” said Helms, along with accommodating other factors such as “the inability to construct in locations during load restrictions and the time required to publish hydraulic fracturing rules if required.”

On the gas side, the higher production growth rates are consistent with an analyst study that shows gas/oil ratios increasing as wells age,” said Helms, adding that nevertheless shallow gas exploration continues to be uneconomic at near-term gas prices.

Natural gas delivered to the Northern Borders pipeline at Watford City was up to $3.69/Mcf, the February statistics show. While national storage figures indicate prices have “bottomed out,” low prices are still expected for the foreseeable future, Helms said.

Helms said that construction of processing plants and gathering systems were at a “virtual standstill until after the spring thaw.” Additions to processing and gathering capacities “are not keeping up, and as a result the amount of gas flared exceeded 30% again, hitting 30.4%. The historical high is 36% in September 2011.