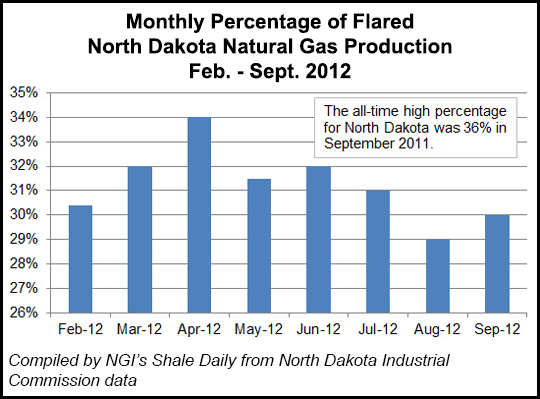 In the state’s most recent data as of the end of September, all-time records were again reached in crude oil and natural gas production, producing wells and permits issued. Oil produced hit 21.8 million bbl, compared to 21.7 million bbl in August, while gas reached 23.8 Bcf in September, compared to 23.6 Bcf the previous month. The daily totals in September were 728,494 b/d and 793 MMcf/d, respectively, both all-time highs.

Prices for crude moved upward during the three month period, averaging $80.65/bbl in August, $84.98/bbl in September and $87/bbl in October. The average price for natural gas exceeded $3/Mcf.

Crude oil takeaway via pipeline is now 39% of daily production, but transportation by rail is at 51% and by truck at 2%.

“Additions to gathering and processing capacity are helping but the percentage of gas flared rose slightly to 30%,” Helms. He outlined several new steps to bring down the amount of flared gas as part of his monthly report on oil and gas activity in what is now the nation’s second biggest oil-producing state.

The North Dakota Industrial Commission (NDIC) has approved state Oil and Gas Research Council funding of up to $1 million for flared gas to be used to create anhydrous ammonia fertilizer.

“Previously, investments were made for research into electrical generation and compression of natural gas for use as fuel or transport to a processing facility,” Helms said. “Future projects may include use of flared gas to produce petrochemicals, conversion of flared gas to liquid fuels and removal of natural gas liquids from flared gas. It is hoped the legislature will consider tax exemptions and royalty certainty to provide incentives for beneficial uses…”

On a webcast, Helms stressed that the flaring is a constant balancing act. “It is still very much a struggle to bring down the flaring percentage,” said Helms, noting that drilling restrictions might bring down the flaring faster but reduce Bakken oil profits by up to 25%. “Flaring is going to be a hard problem to solve. Eventually we need to bring more technology to bear [such as the fertilizer projects].”

The all-time high percentage of flared production in the state was 36% in September 2011, according to NDIC data.

Unlike the drilling build-out, pipeline and gathering system infrastructure are still struggling to keep up. North Dakota Pipeline Authority chief Justin Kringstad said in September rail transport for the first time was used to ship more than half of the monthly oil production.

In addition, North Dakota is connecting wells to gas gathering systems at a record pace, but the number of wells where flaring is occurring continues to ramp up, currently standing at about 1,200 even with more than 5,000 having connections to gas gathering systems. With other longer term options involving power generation, compressed natural gas and liquefied natural gas for transportation and fertilizer production taking more time to develop, Kringstad said it was important in the immediate term to “continue to focus on expanding the gathering systems as quickly as possible.”

Kringstad did not speculate as to whether rail transport would continue to be strong, but he noted that two new crude pipelines would come online next year. The NDIC approved sending a letter of support to the Federal Energy Regulatory Commission for the Enbridge Sandpiper pipeline geared to carry 225,000 b/d. The Sandpiper would carry supplies from the Bakken in western North Dakota to Superior, WI, with a completion expected in 2016.

“The future is going to very much market-driven, depending very much on Midcontinent oil prices and what refiners in the coastal markets are paying. And there is still a lot of disparity between Midcontinent lower prices and higher global prices,” Kringstad said. So, over the long run, it will continue to be attractive to move Bakken supplies by rail. North Dakota has no direct pipe links to California or Philadelphia, so the only option for those refiners to use Bakken crude is through rail.”

Kringstad said he was unsure when there would be more oil pipelines built, reiterating that the ultimate answer would be market-driven. “It is certain we will continue to see rail used for the next few years at least.”