North Dakota set production records for crude oil and natural gas in July, but gas storage programs are on the to-do list to curb flaring and increase gas captured at the wellhead. 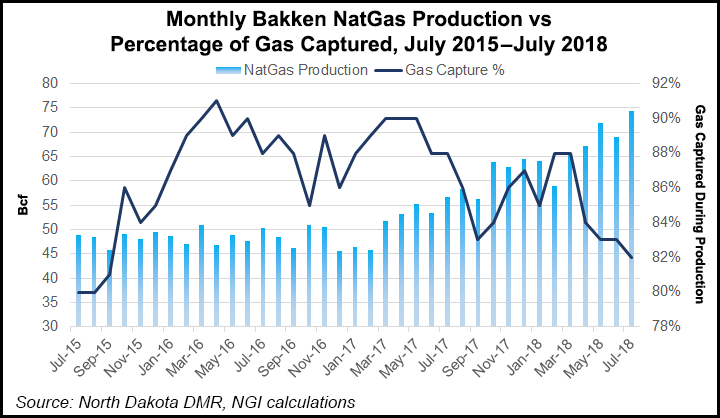 “We lost another one percent on gas capture, as it fell to 82% in July,” said Department of Mineral Resources Director Lynn Helms on Friday. Helms again expressed concern that some operators will be hit with production restrictions when capture goals increase to 88% on Nov. 1.

Due to the gas capture struggle, Helms said the state Industrial Commission (IC) recently approved a $140,000 project by the state Energy and Environmental Research Center (EERC) to investigate the feasibility of sponsoring produced gas storage in the Bakken Shale.

“We’ve done some relatively simple modeling of that concept in the Oil and Gas Division, and it looks like it is geologically feasible,” Helms said. “The EERC will look at what the best technology would be and where the most suitable formations are, along with what are the regulatory implications, if any.” A report is due to the IC in December.

“We’re looking forward to being the first state in the nation to capture produced gas and geologically store it to help the industry with the gathering and processing of natural gas. It would be gas in its pre-processed state, being pumped into a geological formation temporarily [and] stored for two to five years, to help smooth out the disconnect we have between production and infrastructure.”

Helms said at least 70% of the stored produced gas would be recoverable over time. He noted that the state does not want to discourage long-term investment in gathering and processing infrastructure, but this would be a possible interim solution. Currently, there are projected shortfalls in the transmission pipeline capacity out of state; produced gas storage could be a possible solution if that occurs, he said.

“It is a much better solution than flaring, so we are hoping we can be innovative here.”

Another all-time record in July was set for producing wells, reaching 14,972 statewide, with 87% being unconventional Bakken/Three Forks wells. After hitting a high of 66 in July, the rig count dropped to 61 last month. Helms said it settled in at 65 last Friday.