Seismic activity has picked up again this fall in North Dakota in areas outside the Bakken-Three Forks plays, according to the Lynn Helms, director of the state’s Department of Mineral Resources (DMR). 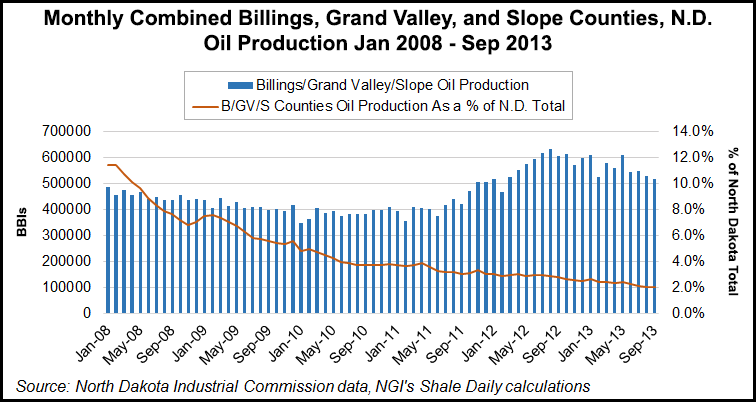 While drilling permit approvals were beginning to climb again in anticipation of the winter slowdown, DMR issued seven permits for seismic exploration activity — two in September and five in October — after issuing none in previous months, said Helms in reporting monthly oil and gas production statistics Friday.

“It is exciting to see this pickup in activity,” Helms said during a webcast with news media. “For the first time in a long time, we received seven surveys ongoing, and they are not just in the traditional Bakken-Three Forks areas.”

Helms said several of the seismic surveys are underway in counties in which there has been relatively little exploration/production (E&P) activity — Billings, Golden Valley and Slope counties — in the southeast corner of the state. “This is an indication that some people are stepping out and starting to take a serious look at other plays and what the structures look like and the seismic attributes,” Helms said.

Oil production in the three counties, which had remained near 400,000 bbls per month throughout much of 2009-2011, increased to 632,000 by mid-2012 and has been over 500,000 bbl per month for 19 straight months, according to North Dakota Industrial Commission data. But the trio’s oil production as a percentage of the state’s total has been in decline for years, accounting for just 2% of the North Dakota total in September.

Helms called the pick up in seismic permits “a long-term leading indicator” that the state might see some uptick in activity in outlying areas in 2014 and 2015. Seismic activity is usually a prelude to eventual leasing activity in a play, he said, although he acknowledged that it is often “speculative.” Nevertheless, when a company or a consortium of companies perform seismic, it can often lead to drilling activity, Helms said.

“The fact that we now have seismic activity in counties that are not part of the Bakken-Three Forks plays is an indication that in a year from now or two years we may see some new drilling activity,” he said.

Helms noted that Whiting Petroleum has turned up “some really good results” in the new areas with what he called a new concept of using 3-D attributes and other technology.

Helms also noted that E&P operators in the state this year have gained increased flexibility in terms of when they begin producing a well’s output, and that is reflected in the steady increase in the number of wells still awaiting completion at the end of each month.

“We have shifted almost entirely into a manufacturing mode and increased density drilling, so you don’t have the pressure to bring wells into production in low-price environments,” he said. “The well paradigm has shifted in 2013 to where operators have enormously more flexibility in where they move rigs, how they deploy their capital and when they drill.

“This is now the case because 90% of the Bakken-Three Forks leaseholds are de-risked and held by production. Lease explorations and other outside forces are no longer driving so much where the capital flows.”

As a result, oil prices this year have been driving production decisions more than they did in the previous three years, Helms said.