For the thousands of early, limited-stage hydraulically fractured (fracked) wells in North Dakota’s Bakken shale play, there is a large potential re-fracking market, and it could be boosted by a new technology using “diverters,” said to Lynn Helms, director of the North Dakota’s Department of Mineral Resources. 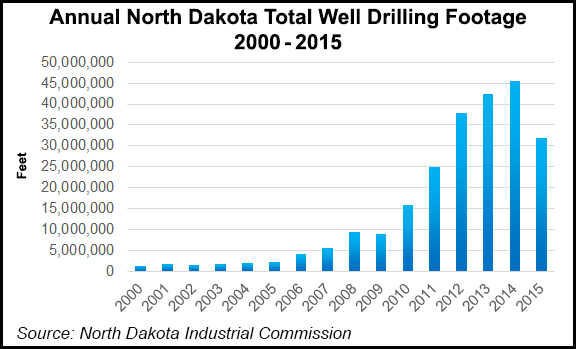 “These are new products developed by the service companies made of fibers or material that looks like talcum powder,” said Helms on Friday. “The materials go into an existing hydraulic fracture plugging it off temporarily, coating the fracture so it will resist very, very high pressures.”

As a result, the diverter materials force the fracture fluids to re-fracture the rock, Helms said. “It’s like a big detour sign, and the exciting thing about it is that the materials are designed to deteriorate and dissolve over time with the aging of the fluids.”

Helms said he thinks the push for re-fracking will grow, particularly when prices get above $50/bbl. “I absolutely think it is a trend,” he said. “In discussions with operators this week, they were talking about taking 50-stage fracks and making them into 100- to 150-stage fracks.”

Helms cited a project referred to the North Dakota Energy and Environmental Research Council for using diverters on some re-frack wells. “It’s an emerging technology to take six- and eight-stage fracking jobs and turn them into 50-stage fracks,” he said.

“It has a huge amount of potential for North Dakota when you consider that there are about 6,000 to 7,000 wells that were drilled in the 2007-2011 time frame that have at best five- and six-stage fracks. All of those wells are potentials for re-fracking.”

Even with today’s depressed oil prices, some of the wells in the Bakken core are what Helms calls “extremely productive” [more than 3,000 b/d]. He said some scenarios see oil prices staying low for another 12 to 18 months. Nationally, he said, the analysts say the industry is close to a “balance point” between supply-demand.

“There have been a couple of frack crews added this summer in the Bakken, and there is talk of perhaps a couple more,” Helms said. “But the drop in oil prices and message from the service companies that when activity picks up they are not going to be able to continue massive discounts, in combination, has really dampened that increase in activity.”

Helms estimates that as a “best case scenario,” the number of frack crews will increase from seven to nine for the rest of this year.