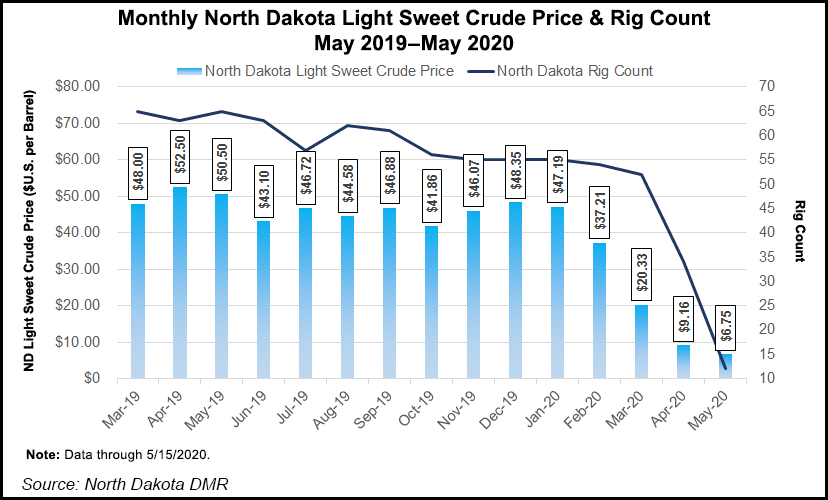 The price for Bakken crude was in single digits at $6.75/bbl last Friday with the rig count at 12, the lowest since 2006. Completion crews had plummeted to one from 25.

The need by exploration and production companies to conserve capital and preserve cash flow “indicate there could be four or five more rigs released before we hit bottom, putting us below 10 and we’re likely to get to that spot,” Department of Mineral Resources director Lynn Helms said Friday during the monthly webinar.

Low oil prices could keep production under lockdown into next year, according to Helms. “Under those circumstances we would have wells that had been shut in five or six months in the middle of winter, so any ramp-up will be much slower than any of us would like to see.”

Since March, two dozen completion crews had stopped working, he said, and “that’s not a pretty picture at all.”

The Industrial Commission (IC) is scheduled to meet Wednesday to consider whether to require producers to proration their oil output. A similar measure failed earlier this month by a 2-1 vote at the Railroad Commission of Texas, which took the side of free markets over requiring oil quotas.

The three-member IC headed by Gov. Doug Burgum plans to consider whether production sold at a loss is considered “waste,” which would negate contractual obligations for operators to produce or ship supplies.

“North Dakota has not taken this type of action since 1965 when the demand for North Dakota oil was miniscule at 14,700 b/d,” said Helms. “The order was effective for about 12 years, and when it ended, demand was up to about 81,000 b/d. The world has changed a lot since the commission last did prorationing, so we will try to consider all that when the IC meets.”

With 8,000 layoffs and additional jobs “at risk,” Helms said it may be a good time to use skilled oilfield workers for other projects on carbon capture and storage or methane emissions controls.

“There are some significant things that could be done to reduce methane emissions,” said Helms. A newly created industry task force, Bakken Restart, is trying to find ways to get more laid off workers back to work. “It is almost a perfect time to work on methane emissions.”

Helms said new technology is being investigated in a joint industry-state program to replace 37,000 emissions patches on oil storage tanks, the top source of methane leaks. “That would put a lot of people to work for a long time because it takes two days to replace one of those pieces of equipment.”