Oil production on North Dakota’s Fort Berthold Indian Reservation has become a significant part of the nation’s second largest oil-producing state, and tribal leaders are touting the reservation’s output as among the top 10 oil producing states in the nation. 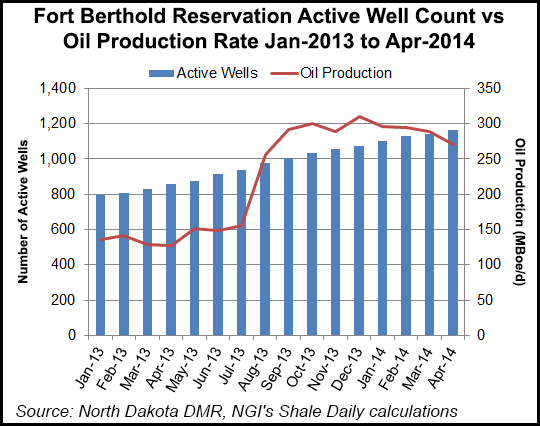 Tex Hall, chairman of the Three Affiliated Tribes — Mandan, Hidatsa and Arikara (MHA) — said the more than 1,000 wells in the Fort Berthold Indian Reservation produce in excess of 180,000 b/d. But his statistics appeared to be dated, because the latest statistics from the state’s Department of Mineral Resources (DMR) indicated that Fort Berthold’s production is closer to 300,000 b/d, and nearly 30% of the state’s overall production.

Hall called the developments “a modern day gold rush, a modern day Deadwood, South Dakota,” appearing in a video that was broadcast at the tribe’s third annual oil and gas expo at the 4 Bears Casino in New Town, ND, last Tuesday. Local news media picked up on the statistics as further evidence of a renaissance ongoing on the MHA-led reservation.

Noting that North Dakota is poised to hit production levels of 1 million b/d by June, a DMR spokesman told NGI’s Shale Daily that production on Fort Berthold in February totaled 271,121 b/d of the state’s 951,340 b/d total. In January, the totals were even higher on the reservation, hitting about 289,000 b/d.

Hall did not say how much money the tribes have made from the surge in oil production, but North Dakota’s state Tax Department records show that the tribe received $131.8 million in fiscal 2013 as its share of revenue, a local news report indicated. It quoted North Dakota U.S. Senator Heidi Heitkamp as lauding the tribes’ oil development as a “critical tool for tribal economic development.”

Hall told the oil/gas expo that the future of the affiliated tribes lies not only in oil production, but also in energy generation, such as capturing natural gas, and all of that is in the future plans of the North Dakota tribes. The tribes are also building a $450 million oil refinery that will be capable of processing 20,000 b/d.

“All of this power that is here needs to be channeled together and developed to create our own power system,” Hall said in his speech, placing emphasis on self-reliance through oil development on the first day of the expo, which is being held under the tagline “sovereignty by the barrel.”

Oil production in Fort Berthold is still very new, beginning modestly with 30 wells in 2008, growing to around 100 wells in 2009 and reaching 1,163 active wells this month, according to DMR data.