Calling it a “five-alarm fire,” North Dakota’s chief oil and gas regulator on Friday reported record oil and gas production declines during May among a sea of inactive or under-active Bakken Shale wells. 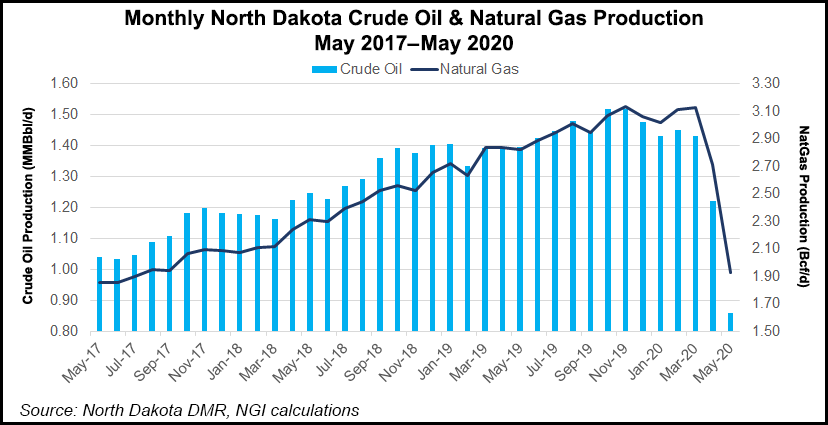 During a webinar to discuss the results, Lynn Helms, who heads the state Department of Mineral Resources and its oil and gas division, attributed the historic downward slide in the most recent statistics entirely to the global pandemic. Echoing comments by other energy executives, he said the world may see some permanent energy demand erosion from Covid-19.

“The last time we were below a million b/d was 2017 and only slightly below, but we were well below 1 million in May,” Helms said. “We’re seeing some of that return so hopefully in the next month or two we may be back at the 1 million number. May had the lowest production since June of 2013.”

Since January, North Dakota’s rig count has declined to around 10 on Friday from 17 in May and 35 in April, Helms said. “In seven months time we’ve seen 82% of the drilling rigs go idle in North Dakota.”

A lone bright spot was gas capture, in which the statewide Bakken figure was 90%, and when the Fort Berthold Reservation was not counted the capture figure was 92%. The reservation operations continued to struggle with flaring with a capture rate of 82%.

Helms extrapolated from the Bakken’s ongoing experience and his global assessment of energy matters to note that the U.S. Energy Information Administration projection for oil prices to recover to from pre-Covid-19 levels by mid-2021 as too optimistic.

“I think whatever demand recovery we are going to get by that time, but I think there is going to be permanent demand destruction as the result of the shift globally [to more electrification,” Helms said. “I think we will see a permanent change in the world economy and the demand for liquid petroleum fuels. I’m not sure the world is ever going to return to pre-Covid-19 demand numbers.”

In the 2021 legislative session, North Dakota lawmakers may need to determine what the declines mean to budgets and policy programs. “It’s going to be a huge topic in the next legislative session,” said Helms.Given current conditions, Helms predicted there are more bankruptcies for North Dakota operators, “unless we get some significant price improvement and some certainty about the Dakota Access Pipeline’s future.”