North Dakota officials last Friday re-allocated $16 million from federal Covid-19 funds to reduce a growing number of drilled but uncompleted wells (DUC) while creating up to 1,000 temporary jobs in the oil and gas sector. 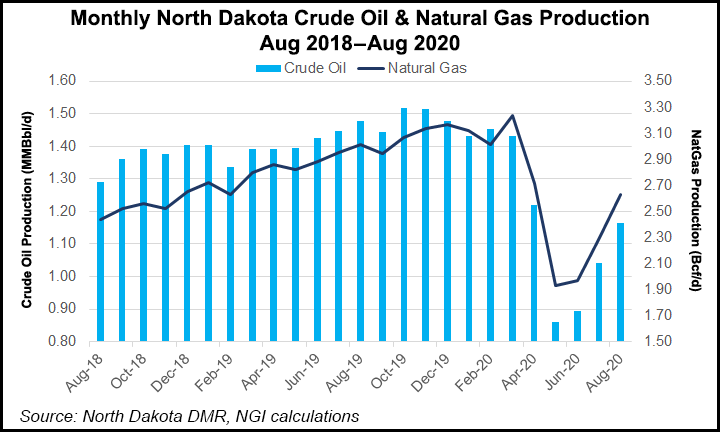 The action by the state Emergency Commission chaired by Gov. Doug Burgum was part of an effort to reassign slightly more than $221 million of unused funds from the state’s $1.2 billion in coronavirus aid, relief and economic security (CARES) Act funding. The $16 million was part of a $66.4 million allocation for plugging and reclamation of 380 abandoned wells, which will be completed next year.

Department of Mineral Resources Director Lynn Helms said the excess funds would support the cost of the water and processing, along with supporting five to 10 hydraulic fracturing (fracking) crews to complete up to 80 DUCs. That would support 500-1,000 completion jobs and 150-200 permanent jobs to operate the completed wells.

Without the reallocation of the $16 million, North Dakota is “going to lack approximately 40 wells/month, or 80 well completions by the end of the year that are needed to hold state production stable and stabilize state revenues,” said Helms, who previewed the repurposing earlier this month.

“We have polled independents and already have 67 DUC wells signed up that were not going to be fracked until the third or fourth quarter next year. The companies are willing to accelerate the completions in November and December if we offer an incentive because current oil prices are about $5/bbl too low to support completions.”

The new program will offer operators up to $200,000/well to cover the costs of water acquisition and disposal, leading to more jobs and 160 completions by the end of the year that would not have happened otherwise, Helms told the governor and several state lawmakers on the emergency panel.

“It’s an enormous job-creation engine, and everything involved in the completions will be taxable for state and local jurisdictions. It will create a little more than $11 million in sales tax revenues, so the return on investment is enormous and it’s supporting the oil/gas sector that received no previous CARES Act direct support,” Helms said.

In responding to questions from state lawmakers, Helms said operators have to qualify wells as DUCs, so wells already scheduled to be fracked before the end of this year are not given the incentives. In addition, he said industry representatives have assured the state they will not seek legislation next year to make the incentives permanent.

“We should see production begin to decline in November without these incentives,” Helms said. “With them, we should be able to hold [Bakken] production stable through mid-2021, and at that time we think WTI prices could reasonably reach the $45/bbl range to make this self-sustainable without incentives.”

Burgum said “it is probably safe to say” that this has the “highest return on investment of any of the dollars we have spent because this is money we get back and a lot more as we try to balance budgets over the next two years.”