North Dakota again set new all-time highs for oil and natural gas production, drilling permits issued and producing wells in August, according to the latest report from state Department of Mineral Resources (DMR) Director Lynn Helms. The average price for sweet crude was up, too. 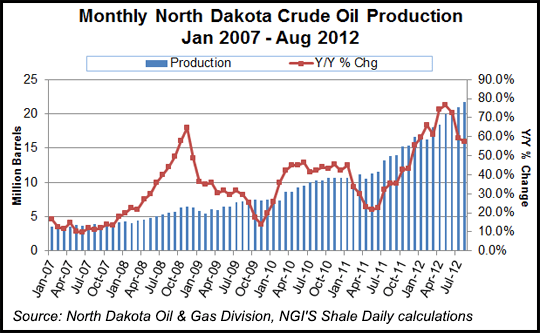 As reported in previous months (see Shale Daily, Sept. 21), natural gas production growth continued to outpace oil, said Helms, indicating that the effect of increased gathering and processing capacity is being felt. The percentage of gas being flared continued to drop.

Even though the overall drilling rig count continued to drop in August, Helms said it has now “stabilized” at about 190, compared with an all-time high May 29 of 218. The stabilization comes as operators “transition to higher-efficiency rigs and implement cost-cutting measures,” he said.

According to data from the North Dakota Industrial Commission’s Oil and Gas Division, oil production in the state rose for the sixth consecutive month in August, but the pace of growth has been slowing a bit as evidenced by year-over-year changes. After rising 76.7% Y/Y in May, Y/Y production growth slipped to 72.3% in June, 59.0% in July and 57.1% in August.

Producing wells jumped to 7,701 in August, another all-time high, compared to 7,467 in July, Helms reported, also noting that permits totaled 273 in September, an increase from 261 issued in August but down from 183 in July.

Helms said the gas processing plant and gathering system infrastructure construction has been “in full swing” during a mostly dry summer.

“U.S. natural gas storage has dropped to 8% above the five-year average, but this still indicates low prices for the foreseeable future,” according to Helms, who reiterated that North Dakota’s shallow gas exploration continues to be uneconomic at near-term prices.

With the additional gathering and processing capacity, Helms reported that the percentage of flared gas dropped to 29% in August, its lowest since the historic high of 36% in September 2011.