The latest monthly totals for oil and natural gas production in North Dakota show continued growth in September, albeit at a slower pace than previous months, a report from the state Industrial Commission’s Department of Mineral Resources (DMR) showed Tuesday. 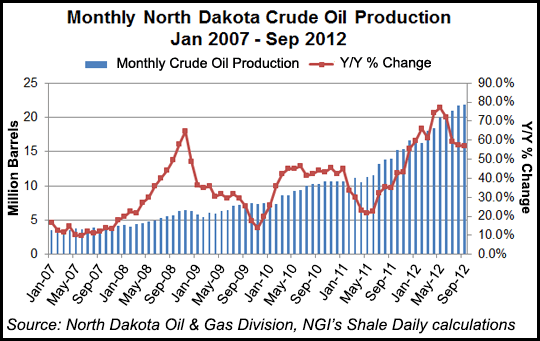 This compares to the DMR director’s report at the end of last month that showed with more than 95% of the activity targeting the Bakken and Three Forks formations in the Williston Basin, August oil and gas production soared from July to August, hitting 21.7 million bbl (701,134 b/d) and 23.6 Bcf (761 MMcf/d), respectively, compared to 20.9 million bbl and 22.9 Bcf in July (see Shale Daily, Oct. 31).

In that earlier report the idle well count decreased significantly, indicating that an estimated 300 wells, a 25% decrease, were waiting on fracturing services.

The number of producing wells in September jumped to 7,899 from 7,719 in August, and the latest statistics counted 8,682 wells available that are capable of production.

All but two of the counties saw one or both of the production figures decline in September compared to August. McKenzie and Dunn counties were the only two that had growth in both oil and gas month over month.