While drilling, prices and permitting all declined in North Dakota, natural gas and oil production set new monthly records, according to the most recent statistics compiled at the end of October in a Department of Mineral Resources (DMR) report released Monday. 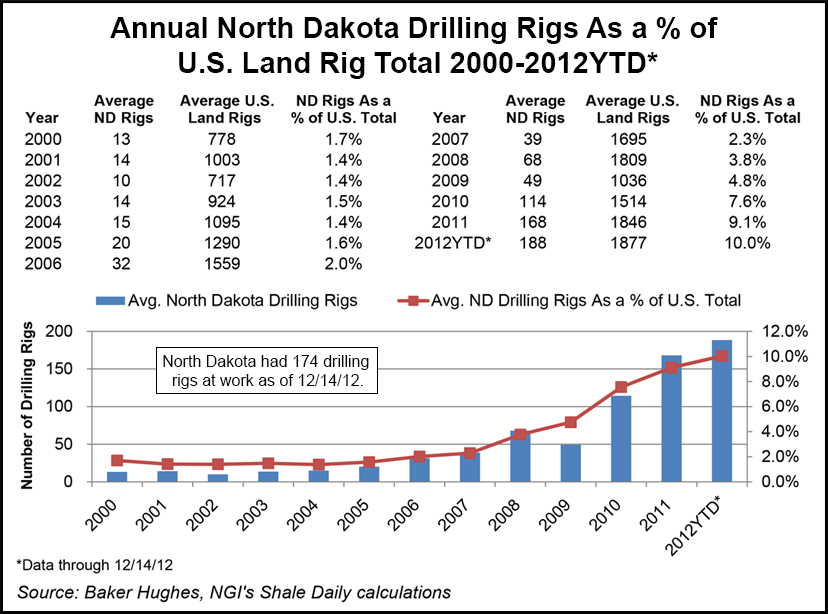 While the number of producing wells also set a new record in October at 8,025, DMR Director Lynn Helms reported “a decline in drilling and an even greater decline in hydraulic fracturing (fracking)” in October. Nevertheless, he said oil production was up 2.5%.

“The rig count has declined further to around 180 as more operators transition to higher efficiency rigs and implement cost-cutting measure at the end of their 2012 capital budgets,” Helms said. “The idle well count rose sharply, indicating an estimated 340 wells are waiting on fracturing services.”

“Daily natural gas production did not increase from September to October,” said Helms, noting the flattening was largely due to dry gas wells and high gas-oil ratio wells in units being shut in. “Construction of processing plants and gathering systems is now affected by weather.”

Helms also noted that U.S. gas storage is up 8% compared to the five-year average, which he thinks indicates “low prices for the foreseeable future.” He reiterated that North Dakota shallow gas exploration is not economic at the near-term gas prices, which dropped again in October to $2.93/Mcf delivered to Northern Border Pipeline at Watford City, ND.

Drilling permit activity has returned to “normal,” Helms said. Sufficient permit inventory now exists to accommodate more multi-well pads, along with the need to build locations before winter weather and the time required to publish hydraulic fracturing rules, he said.

Overall the rig count continued to drop, hitting 186 in November, and dropping to 182 now, according to Helms. Wells actually producing increased to more than 8,000 in October, up from 7,899 in September, but the number of wells capable of producing also has grown, hitting 8,857 in October.