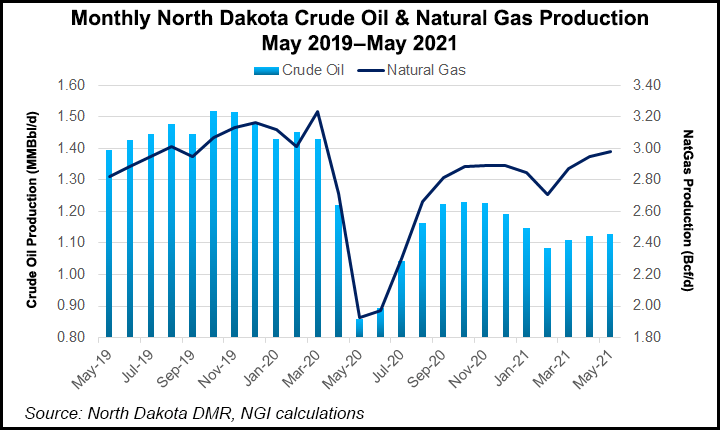 “Operators are trying with all their resources to hire, but they are not finding employees who want to come back to the industry and come back to North Dakota, ” said Helms, director of the Department of Mineral Resources. “Pre-Covid-19 pandemic we had 25 frack crews, and during the deepest part of the pandemic we went down to one crew.”

While oil production was “flat as a pancake,” Helms reported natural gas production rose 1% in May — 92.4 Bcf (2.98 Bcf/d), compared to 88.4 Bcf (2.94 Bcf/d in April). “So again we continue to see an increase in gas-oil ratios and more pressure on gas gathering infrastructure even when oil production stays flat,” Helms said.

Natural gas prices have climbed up substantially, according to Helms, nearing $4/Mcf on Henry Hub. “This has relieved a lot of pressure on producers and operators because natural gas liquids [NGL] are following suit,” he said. “It’s now profitable to separate out NGLs and move them down a pipeline.”

Red ink for gas processing and gas prices has gone away recently, Helms noted, adding that Bakken operators are “very slow” about adding rigs, which hit 23 on Tuesday compared to 20 and 19 in June and May, respectively.

“We’ll see just how long we can stay ahead in this race, but with only 23 rigs operating here and 75 in New Mexico, it is going to be a severe challenge [to stay in second place],” Helms noted. A combination of some new, tough flaring regulations and the continuing western drought could help dampen the New Mexico production, he said.

Gas capture remains better than the state mandated target of 91% at the 92% level, but Helms is hoping to raise that higher in the months ahead. And in May permitting increased substantially with 75 permits issued, Helms said.

Another milestone in May was one county, McKenzie, exceeding 5,000 wells. Helms said for comparison before the shale boom in 2006, North Dakota’s total statewide well count was 3,525. In contrast, the Fort Berthold Reservation statistics declined in May with rigs dropping by two and production by 19,000 b/d, and a big decrease in wells waiting on completion to 64, while the reservation Fee Lands fell back to 84% for gas capture during the month.