North Dakota’s robust oil production is racing toward the 900,000 b/d level and could hit 1.6 million b/d by 2017, but with that growth the state will face stiffer challenges in terms of the growth of infrastructure. 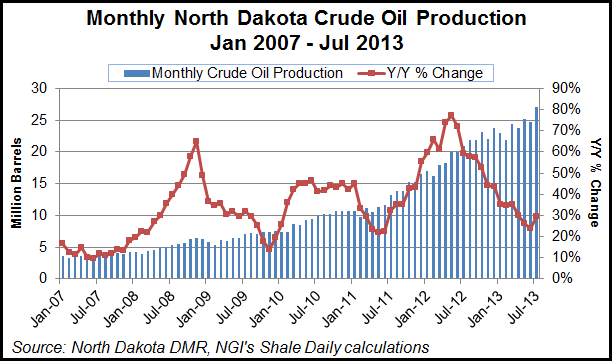 Those challenges cover a range of support services including natural gas, electricity, water, roads and housing, according to Lynn Helms, director of the North Dakota Department of Mineral Resources.

Those problems could cut the production projection eventually by several hundred thousand barrels daily, Helms told the annual meeting of the state Association of Oil/Gas Producing Counties last Thursday. For example, federal rules for hydraulic fracturing (fracking) could cut the 1.6 million b/d to 1.2 b/d because 25% of the state’s production comes from federal lands.

“There is always the potential we will run into demand problems for light sweet crude oil,” Helms said. “The current North American capacity to absorb [increases in] light sweet crude is only about 650,000 b/d, and we’re going to be competing with the Eagle Ford and the Permian Basin for that extra capacity. We have the potential to fill that entire amount.”

Helms added that over time he thinks the capacity crunch for light crude will “correct itself” as refiners get increased interest in the product and switch back to processing more of it. “They’ll also be some price turbulence as a result of all that.”

Helms said rig counts and permitting should remain stable, averaging 185 and 2,400/year, respectively. Production, however, will explode, according to Helms, who said the current 9,322 producing wells operating in July represent only about 10% of the wells that will eventually be drilled in the Bakken Three Forks formation.

“We’re nearing the end of Phase 2, or the de-risking phase for leases and early development [of the Bakken],” Helms said. “We’re well into the beginning of Phase 3, in which we do increased intensity drilling. Based on the results we are seeing, it looks like it is going to take 20 years more of drilling [to reach the Bakken’s peak].”

All of these growth factors present some serious challenges for flaring of associated gas, use of water in fracking and well maintenance, expansion of electric generation, housing and roads and other public necessities, Helms said in his annual county-by-county update.

“We’re beginning to see some serious concerns about water demands for maintenance for Bakken production. That is going to actually eclipse the hydraulic fracturing needs as time goes on.”

For flaring, Helms said “the market is not correcting the situation quickly enough.” About 30% of produced associated gas is still flared,”and at the rate we’re going we won’t get below 20% until well after 2020.” New wells drilled continue to outpace the connection rate, with 220 new wells on average drilled each month and 180 on average connected, he said.

Similarly, with all of the oil/gas growth and corresponding housing and related services growth in the state, North Dakota’s electricity grid system is getting woefully overtaxed, according to Helms, who estimated that generation and transmission capacity will have to triple or even quadruple during the next five-10 years.

“This is going to be critical if we are going to have quality of life in western North Dakota,” Helms said. “And to keep the oilfields going we have to find a way to generate this electricity and transmit it to where it is going to be used.”

Traditionally, North Dakota has relied on coal-fired generation, but now it is turning to more wind, and Helms stressed that will require more natural gas-fired generation as a backup. “We have some really serious things in terms of policy regarding how we are going to generate this three to four times greater power supply.”