Oil and natural gas production in North Dakota, home to the Bakken Shale, slipped in October versus September. 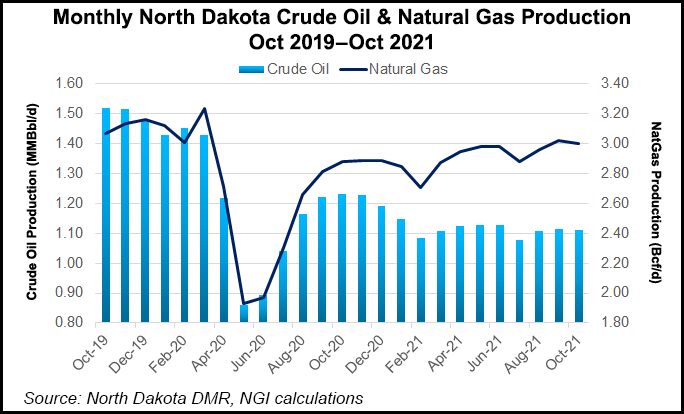 Department of Mineral Resources (DMR) director Lynn Helms issued the monthly Director’s Cut on Friday, which provides information about all of the wells capable of producing, as well as permit activity.

Natural gas production in October averaged 2.99 Bcf/d, according to DMR. This compares to 3.02 Bcf/d in the previous month. The decline in natural gas was higher than oil “which is a little unusual,” Helms said.

Gas capture was flat compared to the previous month at 94%. North Dakota has set a gas capture goal to keep flaring/venting at 8% of production or less. Helms said that gas capture in the state was “well exceeding the limits that were set.”

Oil production slipped month/month in October to 1.110 million b/d, from 1.114 million b/d in September. The Bakken and Three Forks formations made up 96% of the production figure.

Dakota Light Sweet oil averaged $74.35/bbl, versus $64.37 in September. Oil prices were “really strong in October” and “really positive” in terms of revenues for the state, Helms said. “Omicron hit” and world prices dropped, “but they are responding again,” he said.

The rig count, meanwhile, continues to rise from the knock it took last year. As of Friday, the North Dakota rig count stood at 32, compared to an average of 33 in November and 29 in October.

Based on a preliminary estimate, 17,163 wells were producing in October, an all-time state high. Forty-one wells also were completed in October, up by seven month/month.

Permits issued to drill fell in October to 37 from 69, Helms noted. In November, the state issued 50 permits to drill, and two for seismic.

For next year, “there are a few people that are talking $100/bbl oil,” Helms said, adding that “it looks like we are going to have a strong 2022.” Helms also sees activity returning to pre-Covid levels next year. The last 18 months we have “way underinvested,” he added.