North Dakota continued its torrid pace for month-over-month production increases in oil and natural gas, driven principally by the Bakken Shale play, according to statistics released Wednesday by the state Department of Mineral Resources’ (DMR) Industrial Commission. The latest statistics are as of the end of July. 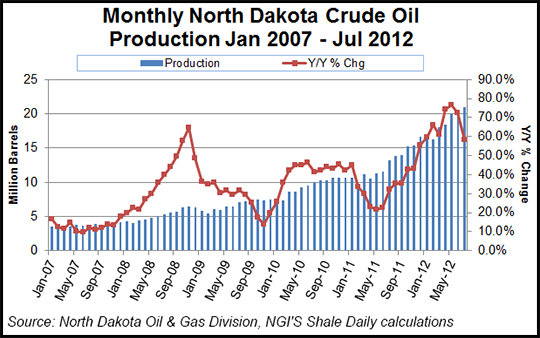 Amid flat rig counts and other mediating factors, the newly crowned second largest oil producing state in the nation has continued its boom this year (see Shale Daily, July 24). Bentek Energy predicted both gas and oil production should continue to grow in the state, but said gas production could grow even faster than oil (see Shale Daily, July 30) which is evidenced in the latest state statistics.

Producing wells increased by more than 100 during July, hitting 7,467, compared with 7,365 in June, the DMR summary indicated. The total number of wells capable of producing was 8,355 in July.

Activity continued to be concentrated in four counties — Dunn, McKenzie, Mountrail and Williams — with the number of producing wells increasing in each of those jurisdictions.

July’s production figures offer two very different takes on the state of activity in North Dakota. On the one hand, monthly production bested 20 million bbl for the first time in history in July. On the other, production was up 58.5% year over year in July, and while that is a robust number, it marks a sharp reversal in the steady growth in year-over-year production that started in July 2011. Simple mathematics argue that robust growth rates are difficult to sustain over time, but rising drilling and completion costs in the Bakken may also be to blame. Many publicly traded operators said during their 2Q2012 earnings conference calls that they either had or were contemplating paring back their activity in the Bakken because of rising costs.

The Bakken/Sanish/Three Forks play has been one of the hottest unconventional oil and gas targets for producers over the last year. According to NGI‘s Shale Daily Unconventional Rig Count, for the week ending Sept. 7 there were 226 rigs in operation in the play, which marks an 18% increase from the 192 rigs counted for the same week one year ago.