Proposed energy bills in the North Dakota legislature continue to hold the spotlight as state lawmakers move closer to their scheduled May adjournment. At least one proposal that could have had a negative impact on oil/natural gas operators was defeated last Friday. 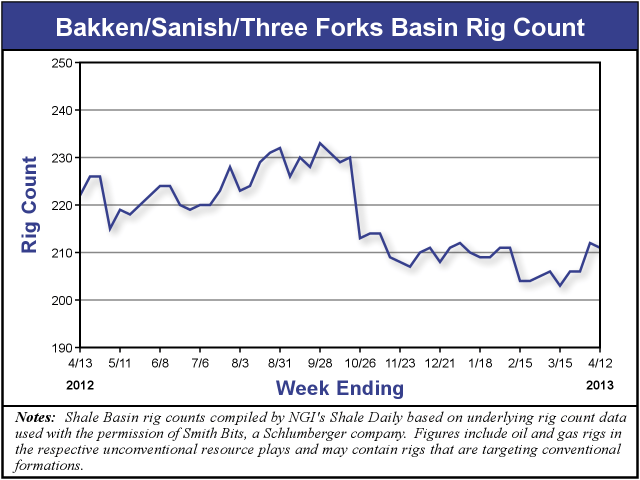 A bill (SB 2359) that would have limited industrial sale of water from the Western Area Water Supply Authority and some independent water companies was soundly defeated in the North Dakota House with 89 of 93 votes cast going against the measure that had passed the state Senate 33-14.

“This assures that there will be ample water for hydraulic fracturing,” a spokesperson in the Department of Mineral Resources told NGI’s Shale Daily on Friday.

While the water effort was being stymied, bills regarding oil extraction revenues and flaring moved along in the process.

A bill (HB 1234) that would split about $87 million of oil/gas tax revenues during the 2013-15 biennium between the state and the Fort Berthold Reservation passed the Senate 46-0 last Friday. The revenues would be from nontrust lands on the reservation. It is aimed at stripper well properties — low producing, vertical wells that date back before the Bakken Shale boom. To encourage investment in oil development in the past the stripper wells were exempted from the state extraction tax. Those wells were defined as ones producing 30 b/d or less of oil.

The exemption, however, has been applied broadly to entire production spacing units so some high-producing Bakken wells with a stripper well in the unit have been avoiding the extraction tax, too. HB 1234 eliminates that possibility and raises the threshold for stripper wells to 40 b/d or less.

The proposed new law also would require the three affiliated tribes that make up Fort Berthold to report annually to the state legislature on the investments they make with the infrastructure and fees, expenses and charges that the tribes impose on the oil/gas industry.

A week ago, on a 46-1 vote, the North Dakota Senate approved new incentives to reduce natural gas flaring at well sites, sending the measure (HB1134) back to the lower House where details now will be hammered out in a conference committee.

North Dakota’s house approved the bill in February, proposing to cut from a year to six months the time oil/gas drilling operators have to find alternatives to flaring the Bakken Shale’s abundant associated (wet) gas. The measure also includes possible tax breaks for operators who can capture the gas rather then flare it.

Even with the shorter exemption period, however, the bill that went to conference would allow exemptions to operators where it would not be economically feasible for them to connect to a gas gathering pipeline. Operators are given 90 days to apply for that exemption, according to the state lawmakers sponsoring HB 1134.

The bill also provides a temporary, gradual property tax exemption for gas gathering systems started from January of this year through 2016.

Legislators have said they hope this proposed new law allows the oil/gas industry to “get a better handle on flaring” than they have over the past two years. The percentage of associated gas overall being flared has stayed stubbornly close to 30% (see Shale Daily, March 20).