Despite industry contraction in late 2014, the oil and natural gas sector has continued to be a key economic engine for North Dakota, contributing $34.25 billion in 2015, the latest full calendar year statistics show, a state university report said Tuesday. 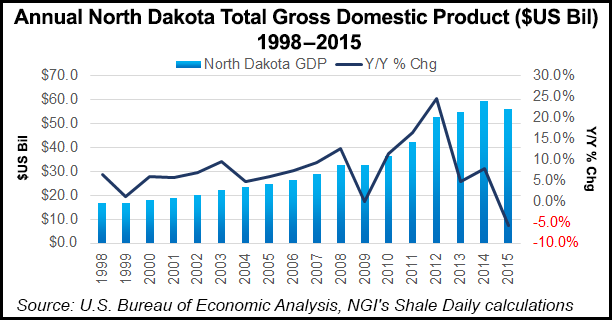 The study, commissioned by the North Dakota Petroleum Council (NDPC), was completed by North Dakota State University’s (NDSU) Department of Agribusiness and Applied Economics. It documented that oil and gas operations in the Bakken Shale-driven state in 2015 produced its second highest ever economic contribution since 2005.

“The study helps confirm that the petroleum industry remains one of the largest basic sector industries in North Dakota in both good years and bad,” said NDSU’s Dean Bangsund, who co-authored the study. He is a research scientist for the agribusiness/economics department. The “retraction” in energy markets created hardships into last year, but benefits to individuals and to the state “continued to be strong,” he said.

The largest impact continues to be in retail trade, or business volume, which hit nearly $9 billion in 2015, while personal income ranked second at $7.54 billion, and the state/local government revenues accounted for $4.1 billion.

“The industry has proven itself to be resilient in the face of downturns in the market,” said NDPC President Ron Ness, who attributed the accomplishment in a depressed global energy market to “continued innovation and development.” Ness said the operators in North Dakota have “done more with less.”

The study is a mixed bag, showing the negative impacts of the commodity price meltdown in lower economic multipliers from exploration/well development, oil/gas production, and the gross business volume throughout the different state economic sectors from households to retail trade. There were increases in the pipeline, rail, refining and gas processing sectors, but total investment in infrastructure was down in 2015 from 2011 and 2013.

The direct economic benefits from pipelines, rail, refining and gas processing ($1.2 billion) increased 23% in 2015 from 2013 totals, likewise did the gross business volumes from transportation/processing ($3.4 billion) which increased 20% over 2013 figures.

The data overall confirmed that the petroleum industry will remain “the largest driver of change in the state,” the study said. Oil production versus oilfield development is increasing in relative economic importance and some segments will be “stable and grow” in their economic contributions.