Natural gas production in North Dakota swelled by 9.7% in June versus May to 3.06 Bcf/d, while oil production rose 3.5% to 1.1 million b/d, according to the latest figures from the North Dakota Industrial Commission (NDIC). 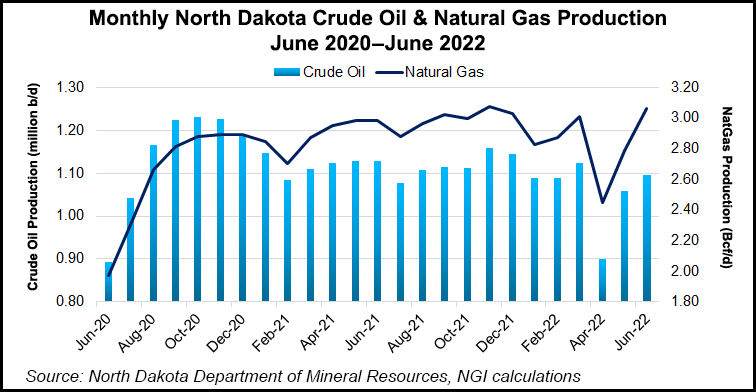 The increases reflect a full recovery from disruptions caused by April snowstorms, as well as strong market fundamentals driving a slow-but-steady activity increase, according to the state’s top oil and gas regulator.

The state saw “good healthy activity in July” as well, said NDIC’s Lynn Helms, Oil and Gas Division director, though official figures for that month won’t be available until September.

The North Dakota Light Sweet oil price averaged $111.35/bbl in June; the price had fallen to $88.25 as of Tuesday. Helms attributed the price drop to supply increases by OPEC-plus in July and August, as well as a recent softening of transport fuel demand.

However, with the cartel’s supply increases scheduled to taper off sharply in September, “we should see those oil prices firm” over the coming weeks, Helms predicted. The NDIC expects state oil production to reach 1.2 million b/d by year-end, and plateau around 1.4 million b/d by the end of the decade, he said.

The natural gas capture rate held steady in June at 94%, as eliminating routine flaring has become a top priority for most of the state’s operators.

Helms, a frequent critic of the Biden administration’s energy policies, said he expects multiple provisions from the freshly signed Inflation Reduction Act of 2022 (IRA) to negatively impact North Dakota’s oil and gas industry. In particular, he cited the law’s requirements for royalties paid on natural gas produced from federal lands and waters.

“The impacts are going to be significant,” Helms said. He said an estimated 25-30% of drilling sites in North Dakota contain federal minerals. The IRA mandates the payment of royalties on all extracted natural gas, including vented, flared or leaked gas.

Helms said “the fees on flared methane, the royalties on any lost or leaked methane, are going to be significant factors…And so undoubtedly, we’re going to see activity shift again further away from developing that 25-30% of our spacing units that contain federal minerals.”

The IRA also mandates reinstating the results of last year’s Gulf of Mexico Lease Sale 257, and it requires three subsequent offshore auctions to occur by the end of September 2023. In addition, the law makes oil and gas lease sales a prerequisite for renewable energy projects to go forward on federal property.

Helms noted, however, that workforce constraints – not federal energy policies – remain the No. 1 hurdle to rapid production growth in the Peace Garden State.

“It is just extremely difficult to attract workers to North Dakota,” he said.

Nonetheless, North Dakota’s rig count had inched up to 47 as of Tuesday from a monthly average of 42 in both June and July. The state’s estimated number of wells waiting on completion stood at 483 as of June, down from 496 in May.

Based on preliminary estimates, North Dakota had an all-time high 17,284 producing wells as of June, up from 16,965 in May, NDIC data show.

The state’s number of active hydraulic fracturing crews stood at 16 as of Tuesday, down from 18 a month earlier, Helms said.