North Dakota is keeping a wary eye on the continuing legal challenges facing the Dakota Access Pipeline (DAPL), which carries 40% of the daily oil supplies from the prolific Bakken Shale. 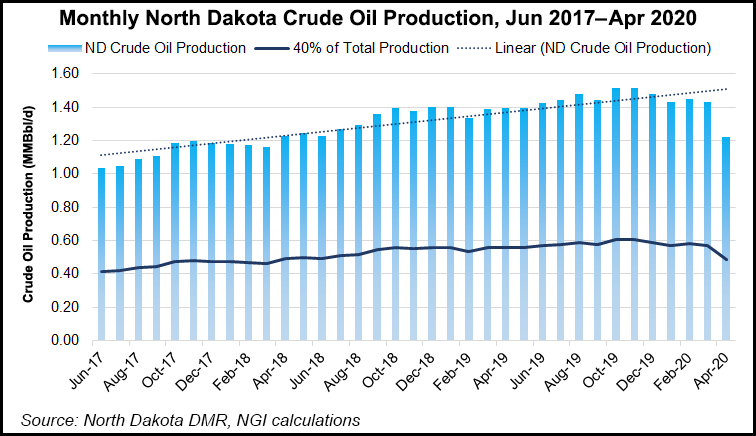 Department of Mineral Resources Director Lynn Helms during a webinar last Friday sounded alarm bells regarding an ongoing legal action that seeks an injunction to shut down DAPL while additional environmental impact work is done.

“The state is extremely concerned about the potential shutdown,” Helms said. “We’re talking about a situation in the middle of all the current [pandemic and economic] destruction that would add a whole new magnitude of destruction” to the Bakken market.

Helms said he talked to one of the state’s three largest operators that has 80% of their oil hedged, while operating the state’s lone remaining active hydraulic fracturing crew and shutting in very little production. This operator is dependent on DAPL to get its production down to the Gulf Coast for export, according to the director.

If there is no DAPL, that operator’s business comes to an end, Helms noted. “So you have a top three operator whose 80% hedges evaporate in that event.”

“If that crude oil was going to find a market, it would have to find a different way of getting there,” Helms said. “It could be weeks, months or years to divert it to rail cars or to find some other pipeline transportation route, and a second major pipeline route out of the state — Sandpiper Pipeline — was canceled, and Line 3 in Minnesota is still hung up.”

Helms said currently he doesn’t know what the odds are that DAPL will be shut down by the courts, but he is hoping “they are a lot better than 50-50.” Although it is unclear when the case will be resolved, Helms assumes it will be sometime this summer.

Earlier this year, federal District Judge James Boasberg ordered the federal government to prepare an environmental impact statement (EIS) on part of DAPL, which separately is working to expand the daily capacity of the 30-inch diameter, 1,172-mile oil pipeline. In May, attorneys general from 14 states urged the court to reject shutting down DAPL during the time the EIS is being prepared for the section of pipeline running under the Missouri River.

A group of industry organizations, including the American Petroleum Institute (API), American Fuel & Petrochemical Manufacturers and the Association of Oil Pipe Lines, filed a friend-of-the-court brief warning that a DAPL shutdown would bring “severe and far-reaching consequences.”

In the brief by API and others, the argument was raised about safety and leakage requirements that are outside the jurisdiction of the Corps of Engineers, and are part of the ongoing oversight by the Pipeline and Hazardous Materials Safety Administration (PHMSA). “In light of PHMSA’s pervasive regulatory framework, DAPL will operate safely while the Corps prepares an EIS on remand,” the group’s court filing noted.