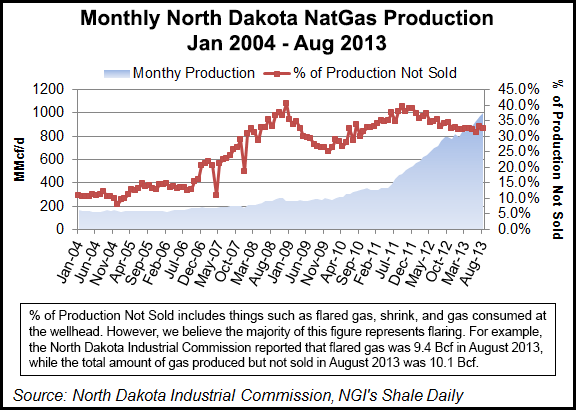 With the release of the most recent monthly statistics, North Dakota showed August gas and oil production overall hit 31 Bcf and 28.2 million bbl, respectively, compared to 30 Bcf and 27.1 million bbl totals in July. “The [production] train just keeps on rollin’,” Helms said. “This makes us a big gas producer, and these milestones are really major.”

Helms called the new milestones “huge,” particularly breaking the 1 Bcf/d barrier, and he said the upcoming 1 million b/d oil production mark will be equally significant, adding that North Dakota only reached the 800,000 b/d level for oil production last May. “So three months down the road, we have broken 900,000 [b/d],” said Helms, adding that the million-barrel-per-day mark should be reached late this year or very early in 2014.

He said the natural gas totals for August are “far more gas than we have ever produced before in North Dakota.”

Progress was reported by Helms and North Dakota Pipeline Authority Director Justin Kringstad regarding flaring and the development of more gas gathering takeaway infrastructure. The percentage of flared associated gas dropped 1% to 29% in August, although the volumes of flared gas inched up to 9.4 Bcf from 9.3 Bcf in July, Helms said. That means that of the 1 Bcf/d of production, approximately 300 MMcf/d is flared.

Helms said the industry in the state has formed a Flaring Reduction Task Force, which has met twice and will meet later this month. Helms said he and Kringstad plan to attend the next meeting.

“The number of wells that don’t have gathering connections is leveling out and we expect that to decline over time.”

The rig count stayed the same month over month (183), but the number of well completions fell sharply (251 in July to 130 in August) due to a combination of some heavy rains in parts of August and postponed completions on a number of multi-well drilling pads, Helms said. Nine new rigs are scheduled to come into the state before the end of the year, he added.

Helms said the outlook is for continued low prices for natural gas nationally as U.S. gas storage now stands at 1.6% above the five-year average. In August, gas production in North Dakota increased 3%, but it lagged oil, which increased 4%.

“This appears inconsistent with the Bentek [Energy] study that shows gas/oil ratios increasing over time, but the number of new wells with lower gas/oil ratios skews the data,” Helms said. “North Dakota shallow gas exploration is not economic at near-term gas prices.”

The latest statistics showed the price for gas delivered to the Northern Border Pipeline at Watford City was up 25 cents/Mcf to $3.34/Mcf.