With flaring of wellhead associated natural gas still hovering around 30%, state officials in North Dakota welcome the proposed new natural gas pipeline from the Bakken to Minnesota by a unit of Bismarck-based MDU Resources Inc., and the governor has pledged support for the pipeline’s development. 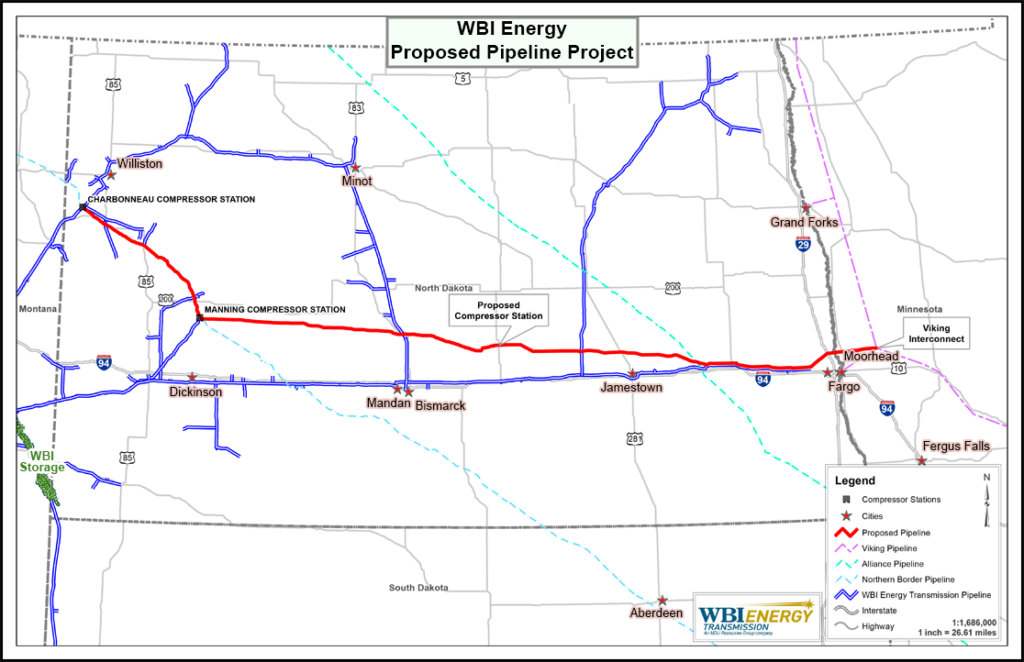 Calling the proposed 400-mile, 24-inch-diameter project an example of the state’s progress in getting more control of its continuing oil/gas boom, Gov. Jack Dalrymple said his state was committed to working with MDU’s WBI Energy business unit “and the entire industry to further reduce flaring.”

Dalrymple praised the $650-700 million project for “adding value to [the state’s] resources, diversifying its economy and supporting our national energy security.”

On Thursday (see Shale Daily, May 31) , MDU said WBI would take on the largest pipeline project in the unit’s history, building a line that would traverse the state, west to east, and connect with an existing natural gas transmission pipeline in Minnesota. Initially it would carry up to 400 MMcf/d, but could be expanded to 500 MMcf/d to serve Minnesota, Wisconsin and other Midwest markets.

The next step for WBI is to seek long-term capacity commitments from shippers on the proposed pipeline through an open season that it hopes to start by the end of summer. Ultimately, the proposal calls for construction to begin in early 2016 and the line to be in service by the end of that year.

Justin Kringstad, executive director of the North Dakota Pipeline Authority, told NGI’s Shale Daily he has been involved in ongoing discussions with WBI regarding North Dakota production and transportation needs for some time. “This is a great project that would add additional market options for North Dakota gas,” Kringstad said. “It would also be a great benefit for communities and business development opportunities in eastern North Dakota.”

He emphasized that additional market options for the state’s burgeoning gas supplies “would be a great thing as we continue to build the necessary infrastructure to capture and transport natural gas.”

In his most recent presentations in the past two months Kringstad has underscored a need to curb flaring with a combination of new gas pipelines and processing plants in the face of accelerating associated gas production that is projected to grow from a 1.2 Bcf/d level this year to 1.6 Bcf/d in 2015.

Kringstad also said about two-thirds of the gas being flared has no pipelines available in the production areas. This is further underscored by the fact that nearly two-thirds of the crude oil being produced in the Bakken lacks a pipeline gathering system, and therefore, it is trucked to processing and takeaway pipeline facilities.

Dalrymple said the proposed WBI pipeline would be able to make gas produced in the far western part of the state available to residences and industries in the east around Fargo and other areas, and to others scattered around the Upper Midwest.

WBI’s proposed line would start at the Charbonneau compressor station near the Montana-North Dakota border in the Bakken, run southeasterly to the Manning compressor station, and then travel straight east through the state and into Minnesota where it would connect with the existing Viking Gas Transmission Co. pipeline system across the border from Fargo.

MDU Resources CEO David Goodin emphasized the ability of the pipeline to bring North Dakota gas to residential, commercial and industrial customers within the state first and then through the Minnesota interconnection to deliver Bakken gas to other parts of the Midwest region.

“The [new pipeline] project, combined with other recent and ongoing projects, would bring our total Bakken-related investment to nearly $1 billion.”