North Dakota Gov. Jack Dalrymple on Monday signed into law a measure (HB 1134) offering tax breaks to oil and natural gas operators as an incentive to cut flaring of associated gas at the wellhead on oil wells. HB 1134 was passed last week by the North Dakota legislature. It will be effective July 1. 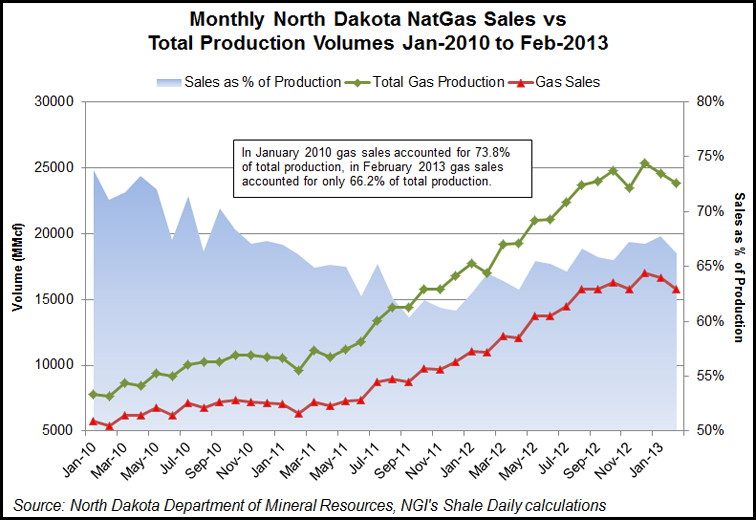 Under the legislation, producers building and expanding systems to process or compress sufficient natural gas at the wellhead would be exempt from paying taxes on those investments.

Earlier this month, the North Dakota Senate approved HB1134 by a 46-1 vote, sending it back to the lower House where details were hammered out in a conference committee over the past two weeks (see Shale Daily, April 17).

North Dakota’s house originally approved a version of the bill in February, proposing to cut from a year to six months the time that oil and gas drilling operators would have to find alternatives to flaring the Bakken Shale’s abundant associated gas. Operators who can capture at least 75% of the gas they produce will be exempt from the state’s 6.5% extraction tax for a two-year period.

There are 165 wells from 2011 that are still flaring and not connected yet, and there is no short-term mitigation plan, according to Lynn Helms, director of the state’s Department of Mineral Resources (DMR) (see Shale Daily, April 19). Helms recently said that DMR supported HB 1134.

Separately, the North Dakota Petroleum Council has publicly indicated it supported the measure, too.

Helms has emphasized the greatly accelerated growth in producing wells projected for the state, which can further complicate reducing flaring. He said that it took seven years to get to the current producing well total in the Bakken (5,156), but it will only take three years for the next 6,000 using the multi-well pads.