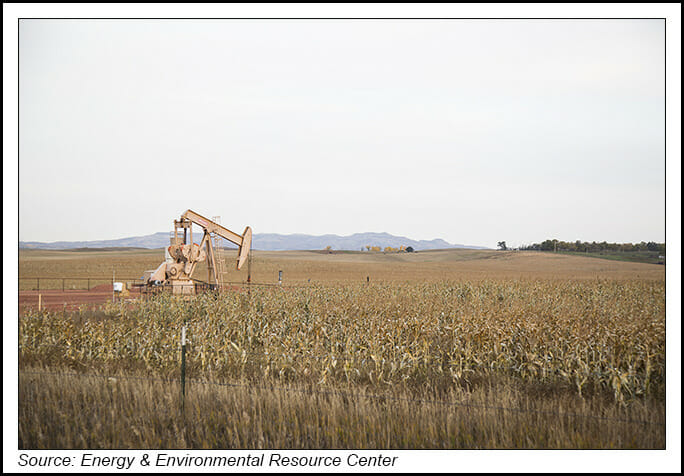 At the Williston Basin Petroleum Conference in Bismarck, Burgum cited the global energy sustainability effort that North Dakota intends to join. He encouraged the oil and gas industry representatives in the audience to support the initiative.

“ESG has become a major topic for everyone, and if you’re a public company it doesn’t matter if you make software or produce oil and gas, this is a board room topic around the world. And if you’re a company trying to raise capital, I’m sure this topic has hit you head on, but this challenge also represents a great opportunity for North Dakota.”

“Of all the opportunities, perhaps none has more potential than carbon capture and storage,” he said. “Everyone recognizes that carbon is vital for life and it represents an enormous opportunity for oil and gas, and the EERC is going to lead the nation in research using CO2 from our power plants for enhanced oil recovery.”

The challenge to become carbon-neutral, he said, “is driving investment and consumer demand for products and services that have no or low-carbon footprints across every single industry.”

Burgum said the climate challenges cannot be solved without the innovations and expertise of the oil and gas sector. “We need to drive capital toward this industry so the amount of research and development can be raised.” He said he is optimistic about the state’s ability to achieve its goals because it has “hit the geologic jackpot.”

American Petroleum Institute CEO Mike Sommers told the audience that the country’s energy industry is working toward “the most important environmental movement in the world today.” The Bakken/Three Forks Shale in the Williston Basin helped America become a global energy superpower, and it will continue in that direction, he said.

“No industry has done more to cut emissions throughout the economy, thanks to voluntary action, not government mandates,” Sommers said. “All the vehicles produced today are 99% cleaner than they were in 1970.”