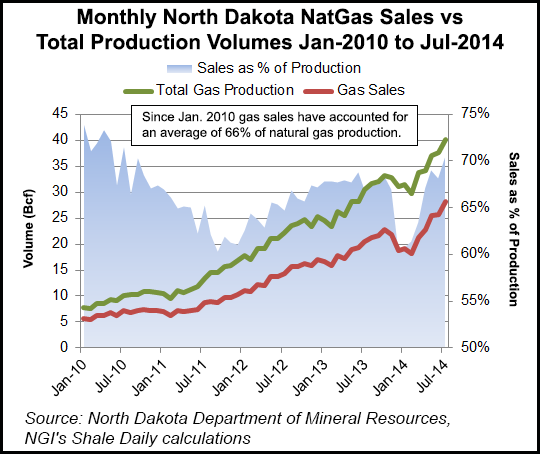 Data show substantial reductions in the flaring of associated gas in July, but it might be hard to keep this success going in the months ahead. Production keeps surging, and efforts to complete gas gathering infrastructure may not be able to keep up, according to the state’s chief oil/gas regulator.

While reporting new monthly records in July for production of oil (34.4 million bbl) and gas (40 Bcf), Lynn Helms, director of the Department of Mineral Resources (DMR), reported that in the month flaring dropped to 26%, or 74% capture, the targeted goal for October in the state’s new gas capture rules. That was a decrease in flared volumes amounting to 18.6 MMcf/d, said Helms, but he added the caveat that “industry still has a lot of work to do” to maintain this and increase capture levels to 77% by January as required by the state rules.

Helms said his concerns stem from the fact that the new Tioga gas processing plant is still only at 70% capacity and will now stay at that level through the winter because of some related permitting bottlenecks, and in addition production and rig counts continue to ramp up while completions of wells and other gathering infrastructure lag behind.

Helms called the latest delays in getting the new gas processing up to full capacity “a major disappointment” and said industry “will have to work hard to get the 74% capture in October.” He said he was issuing a report on flaring to industry in a letter being sent on Friday.

A clear indication that production growth will continue, Helms pointed out, comes from the current rig count of 198, an increase of eight rigs since June. That will put more pressure to accelerate gas capture efforts, he said, noting that “operators know there is no better place to make money right now” than in the Bakken/Three Forks shale formations. He cited the example of a major production area such as McKenzie County now having 71 rigs in operation, only slightly (5%) less than its all-time high number for rigs.

In July there were 11,287 producing wells out of a total of 12,495 wells capable of producing, DMR’s most recent monthly statistics showed. Among the producing wells, 7,862, or 78%, were unconventional Bakken/Three Forks plays.