A state legislative committee on Wednesday approved industry-supported rule changes for oil and natural gas drilling in North Dakota, according to the Department of Mineral Resources (DMR). The changes take effect April 1. 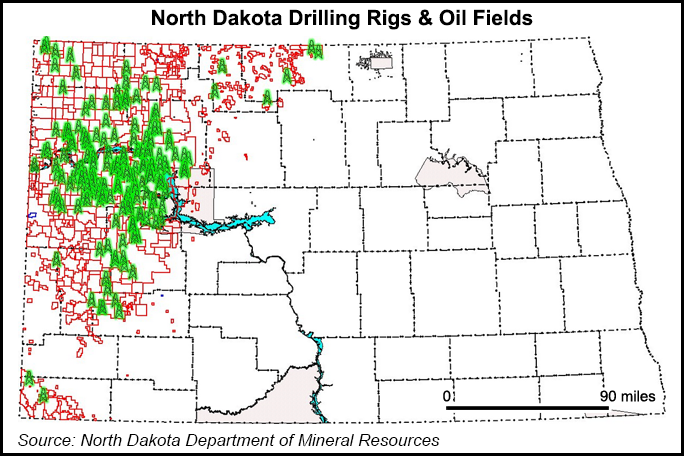 More than 40 sections of code have either been modified or added in the 2013-2014 oil and gas administrative code changes, a spokesperson said. Among the changes, DMR has increased oversight for gathering pipelines, stronger spill reporting/notification requirements, and expanded regulation of treatment plants for oilfield waste.

The new rules are the culmination of a nearly eight-month process and several new state laws, including HB 1333, that mostly focus on above-ground environmental issues, versus changes two years ago that clarified underground environmental hazards, the spokesperson said.

A North Dakota Petroleum Council spokesperson said the industry members were involved throughout the process generally have been supportive.

“From the DMR’s standpoint, implementation of the new gas gathering pipeline reporting requirements is a big deal for us,” spokeswoman Alison Ritter told NGI‘s Shale Daily. It will require the state agency to maintain a database on all new and sited gathering systems to Aug. 1, 2011.

“Companies will have to submit to us affidavits of completion and how the gathering pipelines are put into service,” she said. “So, we’ll have to maintain a confidential GIS [geographic information system] database on these pipelines. We have already updated our website to require more information that was being reported.”

Another area that is new deals with permitting for oilfield treatment plants. The permitting process remains the same, but the rules now incorporate other DMR responsibilities.

Oil and gas rules are required to be modified every two years following the state legislative session. The final rules can be found on the DMR division’s website.

“If you look at the changes that were made in 2012, you would see those rules primarily focused on technology improvements and environmental protection beneath the surface,” said Bruce Hicks, assistant director of the oil and gas division. “The 2014 changes that were adopted continue to evolve with technology. However, these changes focused on environmental protections above-ground.”