North Dakota’s chief oil and natural gas regulator said Friday he expects prices to stay low for the rest of the year, making it harder for the state to maintain its 1 million b/d crude oil production level in the Bakken Shale. 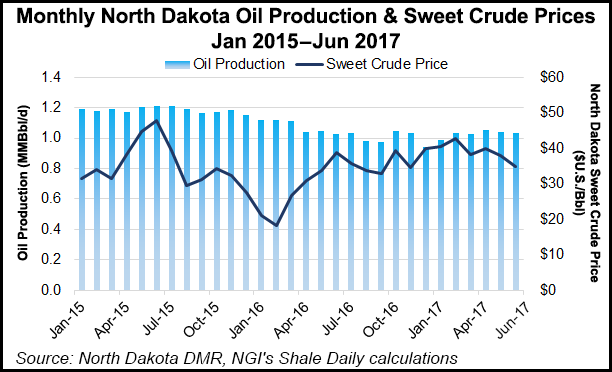 After climbing earlier in the summer, the rig count dropped by one early this month to 57 after moving from 55 to 58 (June to July) earlier, said Lynn Helms, director of the North Dakota Department of Mineral Resources (DMR). If the West Texas Intermediate]price drops below $45/bbl for more than 30 days, “the rig count is expected to drop,” he said during a webinar to discuss the latest production statistics.

North Dakota now expects “oil price weakness” to continue through the rest of this year. Helms pointed to uneven compliance by members of the Organization of the Petroleum Exporting Countries (OPEC), which extended production restrictions through next March.

“The markets are watching to see if the U.S. shale production offsets OPEC cuts,” he said as U.S. crude inventories have been dropping.

Even with the depressed production, the number of producing wells set a new all-time high of 13,915 on a preliminary basis, Helms said.

In June, the estimated wells waiting on completion rose by 35 from May to 865, and the estimated inactive wells were down by 53 to 1,458.

There was a 1% decrease in the amounts of flared gas captured in June, increasing flared volumes by 19.5 MMcf/d in June from May. The capture rate was 88%, compared to 89% statewide in May. These levels of capture are still well above the Bakken historical record flaring six years ago that hit 36% in September 2011.

The statewide requirement currently is 85% gas capture through Oct. 31 next year before it moves up to 88% and 91% in subsequent years through 2020 under the state’s current phased-in flaring requirements established several years ago.