The global crash in energy prices and demand is expected to cause a significant increase in idle wells in North Dakota’s Bakken Shale, prompting the state to look for ways to protect taxpayers who could be stuck with the bill for remediation. 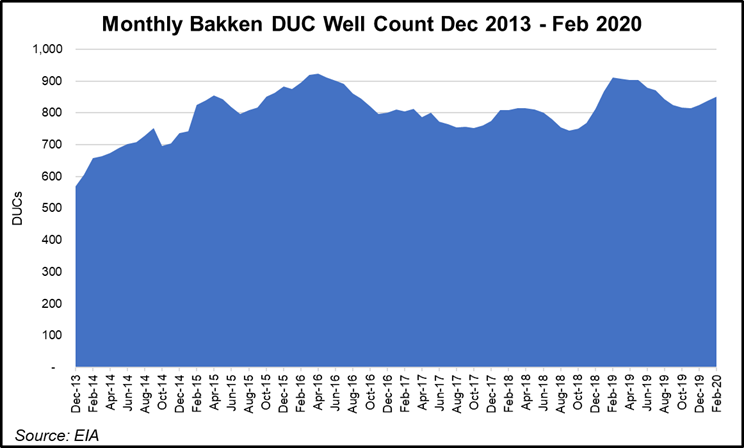 Department of Mineral Resources Director Lynn Helms said the Industrial Commission (IC), whose members are the governor, attorney general and agriculture commissioner, may take action to provide protections. Five years ago, in the midst of the severe global oil price crash, the IC suspended requirements that inactive wells had to be plugged and abandoned.

“Inactive wells and abandoned ones are a huge concern long-term for the commission,” Helms said. “We’ll be looking at a price trigger and whether there should be a time limit on the policy” regarding oil prices. “What we don’t want is for candidate wells for refracturing being prematurely abandoned.”

Regardless, the inactive well count is expected to keep increasing, with more new wells not tied to sales if the IC waives requirements. “These are brand new wells so we know they’re not going to be abandoned,” he said.

Another conundrum is forecasting revenues from the sector for this year. “At this point the creation of a revenue forecast has been postponed because of just too many variables,” Helms said. “We need more time to analyze all of the variables.”

Another area that could benefit from the production/price rollbacks is wellsite natural gas capture, with producers struggling to meet the state goal of 88%. During a significant production downturn, Helms said capture could exceed 90%, which happened in 2015 during the global price drop.

“In the short term things look great for gas capture, but longer term, there could be even bigger problems as we come out of the low prices,” he said.

From a domestic competitive standpoint, Helms thinks the Bakken will fare better during the downturn than the Permian Basin, which accounts for up to 2.5 million b/d of the 3 million b/d U.S. exports, which “are going head-to-head with Russian and Saudi supplies. Those are going to be the most vulnerable barrels, and those are Permian barrels.”

Still, Bakken producers are expecting their cash flows to decline at least 15-16/%, he said, which will reduce activity in the oilfields.