With existing goals getting tougher to meet, North Dakota officials are primed to revise the natural gas capture rules as infrastructure companies struggle to keep up with record production growth in the Bakken Shale. 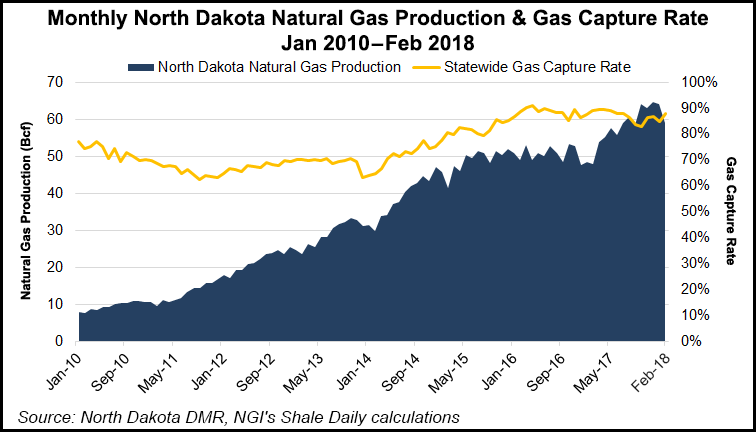 Gas production reached another all-time high in February, hitting more than 2.1 Bcf/d. February, a shorter month, had overall production of 58.8 Bcf, compared to January’s 64.2 Bcf (2.07 Bcf/d). Gas capture in February improved to 88% statewide and 89% for the Bakken after falling to 85% the previous month.

Lynn Helms, director of the Department of Mineral Resources, presided over a webinar to discuss the latest statistics. He said the North Dakota Petroleum Council (NDPC) gas capture task force has completed a review and has submitted a report to the three-member Industrial Commission (IC), which meets on Tuesday.

For oil production, North Dakota is a lot better off coming out of winter than expected at the end of last year, he said.

Overall, February statistics are “good news, encouraging news” for the near-term outlook in the Bakken.

Producing wells at the end of February were 14,327, slightly less than the state’s all-time high (14,338) reached at the end of last year. Permitting has stayed steady, according to Helms, hitting 108 new permits in March, compared to 96 in February and 106 in January.

The state’s rig count continues to slowly climb, hitting 60 last Friday from 56 in January, 57 in February and 59 in March.

“In discussions with CEOs and operators, we could see an additional seven to 10 rigs by the end of this year,” Helms said. The state is expecting “moderate growth” for the rest of this year.

He also said the recent surge in oil prices is tied to unrest in Syria.

“The other thing this tells us is that global storage levels are pretty much normal,” he said. “We see that in the U.S. storage, too. The fact that unrest in Syria spiked prices tells us that the big oil surplus has worked itself off” worldwide.