Stakeholders in North Dakota’s oil patch offered diverse opinions on Wednesday to the state’s oil and gas regulator on how to address the challenges facing operators and mineral owners in the Bakken Shale, where exploration and production (E&P) has been decimated by the collapse in demand and prices caused by Covid-19. 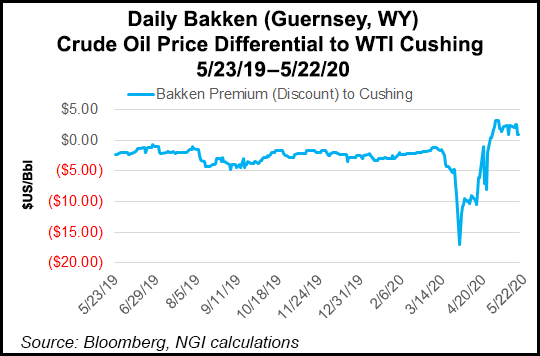 The North Dakota Industrial Commission (NDIC) sought testimony for a webcast hearing on how to determine the oil price at which production may constitute economic waste amid the current market turmoil, and input on how best to rebalance the market and restore activity levels.

Although the option of prorationing, i.e. mandatory production cuts, has gained little traction in other jurisdictions such as Texas and Oklahoma, the Bakken’s largest operator, Continental Resources Inc., expressed support for the measure in North Dakota, the country’s No. 2 oil producing state after Texas.

Citing market oversupply caused by Covid-19 and exacerbated by an oil price war in March and April, Continental’s Blu Hulsey, senior vice-president for government and regulatory affairs, said in written testimony that, “based on the statutory definition, waste is indeed occurring,” and that, “the NDIC should take immediate regulatory action to mitigate that waste.”

Hulsey argued that, “North Dakota operators are contributing to waste by producing in excess of reasonable demand and in excess of global storage capacity,” adding, “Clearly, what is needed now is the allocation of production volumes among producers through a reasonable temporary proration schedule set by the NDIC.”

However, Continental, which is chaired by the shale pioneer Harold Hamm, appeared to be in the minority among E&Ps.

A slew of operators, including fellow Bakken heavyweight WPX Energy, Inc., the North Dakota Petroleum Council (NDPC) and the American Petroleum Institute (API), all said the market, rather than regulators, should dictate production cuts, and that authorities should instead focus their efforts on easing regulatory burdens and incentivizing the industry to get back to work.

NDPC president Ron Ness told regulators that a market-driven response determined by operators “is the correct approach as opposed to government intervention,” adding, “NDPC believes a one-size fits-all approach from state regulators on this issue is problematic and potentially harmful as the industry struggles to stabilize and recover.”

Ness praised the NDIC for taking early action to remove barriers to shutting in wells so that the industry could respond to market conditions.

As evidence to support letting the market correct itself, Ness said that a conservatively estimated 6,900 producing wells had been shut in to date across the Bakken, translating to about 550,000 b/d of output cuts, and that just one hydraulic fracturing crew was operating. The state’s active rig count stood at 14 as of May 22, down from 64 on the same date last year.

Rather than prorationing, Ness said that NDIC should conduct a cost-benefit analysis of all existing regulations and update them accordingly, and that it should adopt regulatory relief measures to put the Bakken region back to work. He added that “any policies, fees, service charges or other requirements” deemed non-essential should be eliminated or reduced.

“Shutting in wells comes at a large cost and substantial risk to operators,” Ness said, adding, “Potential use of federal stimulus funds toward alleviating that risk would be extremely welcome by operators as they determine which shale development assets to restart. Certain tax incentives would likewise create an advantage to restarting production in North Dakota.”

He also highlighted that states with the authority to enact prorationing, including Texas, Kansas and Louisiana have declined to do so, and argued that the one recent example of mandatory curtailment in North America – in Alberta, Canada – failed to shrink the discount of Western Canadian Select crude relative to WTI, and “led to lost opportunities for new investment, infrastructure expansions and economic growth over the period.”

Indigenous mineral owners also turned out in force for the Wednesday hearing, imploring the NDIC against relief measures they said would only benefit operators by allowing the industry to avoid its contractual and environmental responsibilities.

Tex Hall, president of the Fort Berthold Indian Reservation’s Land and Mineral Owners Association, said in his written testimony that the NDIC “does not have any jurisdiction” to determine if economic waste is occurring on tribal lands, and that any relief measures being discussed must include “all allottee land owners along with our federal partners.”

Numerous mineral owners pointed out that oil and gas leases expire when wells stop producing oil in paying quantities, and that they would move to terminate non-producing leases, no matter the market conditions.

In the wake of Covid-19, states including Oklahoma and New Mexico have enacted relief measures allowing operators to shut in production without losing their leasehold rights.