Reflecting changed market conditions, the amount of Bakken Shale crude oil being shipped by rail continues to decline, according to the latest statistics released Monday by North Dakota energy officials. 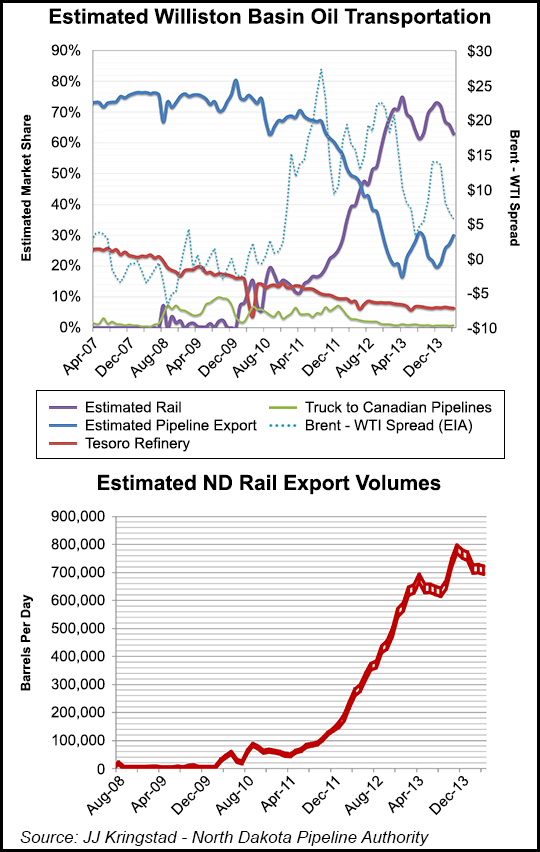 After peaking at more than 70% of the oil transported out of state, crude oil by rail dropped to 59% in May, the most recent month for which there are complete statistics, said Justin Kringstad, director of the North Dakota Pipeline Authority. Kringstad spoke at a monthly webinar during which the latest production figures were released.

“We’re continuing to see the percentage of oil moved by pipeline [41% in May] grow and the percentage of rail continue to decrease over the last few months,” said Kringstad, who offered an update on two recently announced pipeline projects for moving oil out of state (see Shale Daily, June 24; June 26).

Kringstad clarified that the Enterprise project is still in the “business development phase,” while ETP concluded a successful open season and is ordering pipe for its project for moving oil easterly to Patoka, IL, and eventually to the Gulf Coast. Enterprise’s project would head west through Montana, Wyoming and Colorado before going down to the Cushing, OK, hub, which has lines going to the Gulf.

Kringstad attributed the recent shift away from rail transport to several factors, including market conditions and production levels in the oilfields. A third factor is the availability of rail tank cars and pipeline capacity for transport.

“I can’t speak for individual companies, but in general it comes down to several factors: market conditions, availability of the different transportation systems [rail, pipe or truck], and production levels. All of these play into the decisions of companies as to whether they use rail or pipeline transport.”

In response to questions during the webinar, Kringstad said there are companies looking at rail facility expansions in North Dakota — expansions and building of new facilities. He did not have any specific details on those plans, however.

In response to separate questions about incentives the state is providing, Kringstad said there are no incentives offered for rail crude oil transport, but there are incentives for natural gas pipelines as a means of improving the takeaway infrastructure from the Bakken/Three Forks shale plays.