North Dakota officials on Tuesday established an unprecedented set of rules that will be implemented beginning Oct. 1 to reduce associated natural gas flaring from oil wells. 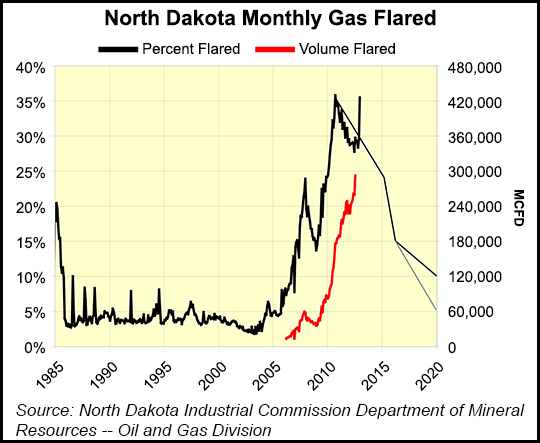 The commission wanted to do “something completely new,” Helms said. Beginning Oct. 1, oil producers will have to capture at least 76% of the associated gas or face production restrictions until they achieve that goal.

“This is the piece that answers the question of what happens to oil supplies if capture plans are not followed through,” said Helms. The overall goal is to reduce the number of wells flaring and the volumes of gas flared.

Helms said if the restrictions had been put in effect in April, with no time for producers to implement gas capture plans, production could have been reduced by 4-5%. Since operators now have a few more months to implement capture plans, he estimated that any reduction in production would be much lower — in the 2-3% area, if that high.

Unlike in the past, wells that are connected to gas gathering or processing systems will not be exempt from flaring restrictions. Most recent statistics indicate that of the 30% of the associated gas flared, 19% of that amount comes from connected wells, Helms said.

“This is the enforcement mechanism behind gas capture plans. What we are trying to do in North Dakota is come up with something completely new. All of the [producing] states have the same tools in their tool box requiring producers after a certain number of days to do something with production.”

North Dakota adopted many of the recommendations issued earlier this year by an industry task force (see Shale Daily, Jan. 30).

Helms said commissioners told him they wanted no exemptions to the flaring requirements as have existed in the past, such as one year on taxes and royalties. “This needed to be very solid and we followed those instructions,” he said. “I have my marching orders.”

The North Dakota Petroleum Council (NDPC) had urged that production restrictions not be implemented in the enforcement (see Shale Daily, April 23).

Noting that the industry has been fully focused on flaring for some time now, a NDPC spokesperson told NGI’s Shale Daily that “since the gas capture plans were required starting June 1, we’ve already seen companies substantially adjust some of their permits to ensure they are emphasizing their ability to capture their gas on multi-well pads. Our members will be zeroing in on their efforts to ensure we are meeting these targets.”

Dan Grossman, Environmental Defense Fund (EDF) Rocky Mountain regional director, lauded the state for establishing production limits if flaring goals are not met. “This is the type of performance standard that EDF advocated for in our comments to the DMR’s Oil and Gas Division in April. We look forward to carefully reviewing the commission’s order to better understand its implications — particularly with regard to the exemptions provided for some wells.”