North Dakota officials reported Monday another monthly increase in oil and gas production, albeit modest, but they focused more on what is being viewed as a lack of progress in reducing the amount of flared associated gas at the wellhead. The most recent results were for May. 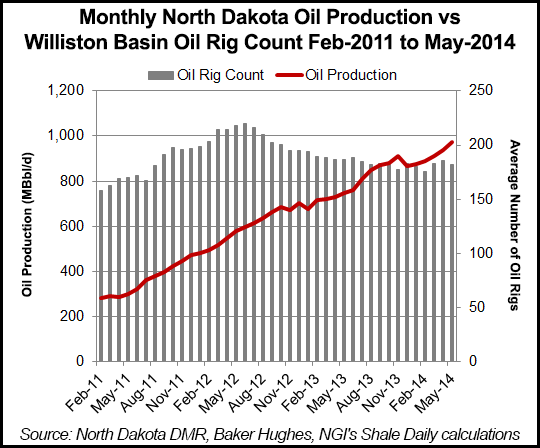 While noting production in May hit new all-time highs, the state’s chief oil and gas regulator, Lynn Helms, expressed disappointment that newly required gas capture plans are not driving down the percentage of flared gas as much as he would like, and the prospects for meeting future goals are dim.

In the meantime, Helms, the director of the state Department of Mineral Resources (DMR), is predicting that production will pick up briskly this summer, averaging about 6% in monthly growth from June through August.

Expecting flaring to be in the “low 20%” area by now, Helms said May statistics show the amount of wellhead associated gas being flared at just under 28%. He called that “surprising and disappointing.”

The continued problem underscores the importance of the action taken July 1 by the North Dakota Industrial Commission (see Shale Daily,July 2) and the fact that “it was really needed,” Helms said. “The market itself is going to struggle to reduce flaring percentages. We are going to need that change in the flaring paradigm that the commission has adopted.”

Helms said the worst of the flaring problem is found in the state’s biggest oil-producing county, McKenzie (2,498 producing wells). “We’re going to have to start drilling down and looking at where flaring is taking place and then start implementing production curtailment and permitting curtailment before too long.”

Later in a monthly webinar in which DMR releases the latest production statistics, Helms said he doubts the state will be able to meet its immediate goal of capturing at least 74% of the newly produced wellhead gas by Oct. 1. “I doubt without some application of wellsite technology and without some production curtailments that we will get there [meeting the October goal],” he said.

That future production curtailment could amount to up to 40,000-50,000 b/d in reduced statewide output if there is no wellsite technology applied in coming months, Helms said, adding that in drilling down on a county-by-county basis, it is clear that there are some real impacts continuing from various processing and takeaway gathering system bottlenecks.

As an example, Helms said the newly expanded Tioga gas processing plant operated at under 50% of its (130 MMcf/d) capacity in May, and a lot of it is because of delays in the development and/or federal permitting of connecting pipelines and other related infrastructure.

“That was really a surprise. I thought the Tioga plant coming back online in May would have really made a difference and it didn’t.”

Helms said that fully a quarter of the gas capture plans submitted so far have been found lacking in some regard and as a result, permitting holds are being placed ranging from five days to months. “They vary from being very incomplete to just missing a few line items,” he said.

Nevertheless, the most recent numbers show producing wells hit an all-time high in May (10,892) with 69% of those being in the Bakken/Three Forks shale plays. Permitting jumped from May to June with the latter number being 247 permits issued. The rig count is steady, hitting 190 in June and sitting at 191 on Monday when Helms released the latest statistics.