If various regulatory and economic hurdles can be overcome, storage of produced natural gas through reinjection in the oil patch may prove to be a breakthrough for curbing flaring in North Dakota’s Bakken Shale, according to a state-sponsored report released Wednesday. 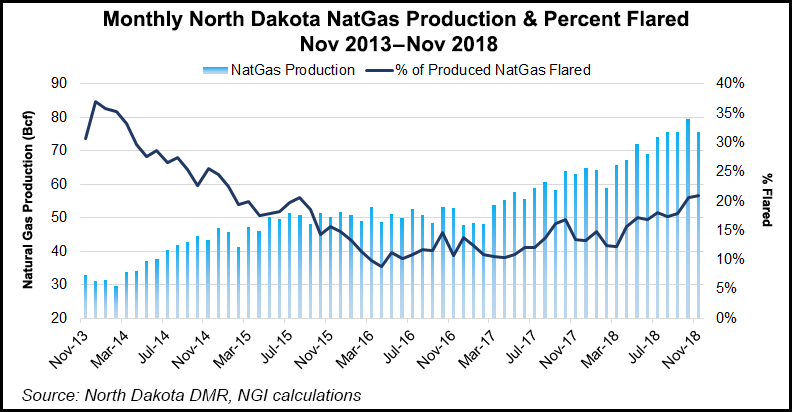 The Energy and Environmental Research Center (EERC) at the University of North Dakota concluded that if certain issues are resolved, injecting gas produced with the Bakken’s abundant crude oil supplies into underground formations and withdrawing it later could allow for more oil production and help meet state-mandated gas capture goals.

North Dakota’s three-member Industrial Commission (IC) called for the EERC study and provided $140,000 last year to underwrite the work. The aim is to reduce flaring in the coming years while the multi-billion dollar building of midstream processing plants, pipelines and other infrastructure is completed.

Lynn Helms, director of the state Department of Mineral Resources, said of gas storage that “the economics aren’t great, but it is economic under the right circumstance.”

Helms cited regulatory, tax and royalty issues that come with the storage option. “They need to be clarified before companies would likely consider implementing gas storage,” he said, adding that the study could prompt state lawmakers to consider legislation affecting landowners and mineral interest owners.

One of the regulatory issues needing clarification, the EERC report noted, is whether landowners should be paid for the temporary use of pore space, or the underground cavities and voids. Ownership of that underground space belongs to the surface owner — not the mineral owner. Helms told a state legislative committee he thinks there will be legislation this session covering pore space.

Helms called gas storage “marginally economic” these days, so if pore space costs are added, it is tougher for operators to justify storage.

EERC’s John Harju, vice president for strategic partnerships, calls gas storage “another tool for the toolbox,” conceding that the best option for gas capture is transporting supplies via pipeline to a gas processing plant. “But when that’s not an option due to inadequate infrastructure, temporarily storing gas is one way companies could continue increasing oil production without increasing flaring,”

Noting current production levels of oil and gas in the state are at 1.3 million b/d and 2.56 Bcf/d, the report’s authors said that in the two most recent months for which data is available, operators flared 20% and 21% of their production, or about 527 MMcf/d due to inadequate infrastructure. Current state goals call for no more than 12% flared.

The report estimated that companies in the Bakken voluntarily curtailed oil production in the range of 50,000-80,000 b/d last November to reduce their flaring volumes.

EERC’s Harju told NGI‘s Shale Daily that “one of our biggest challenges is not only the natural gas side of the equation, but also the export side and natural gas liquids (NGL). The EERC has been working on the use of ethane and rich gas in general as working fluids for enhanced oil recovery [EOR].”