Oil and natural gas production in the Bakken Shale in North Dakota continued to shatter records at the end of last year, according to the monthly report issued last week by the Department of Mineral Resources (DMR). 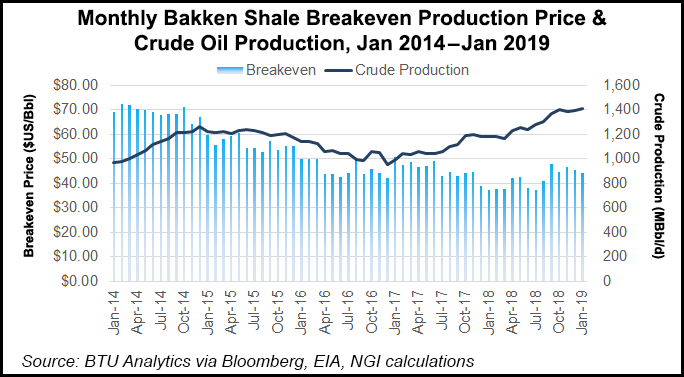 Crude oil output rose 2% month/month to 43.4 million bbl (1.4 million b/d), while natural gas production was up 5% to 82.1 Bcf (2.65 Bcf/d), said DMR Director Lynn Helms in his monthly webinar. He called it a “great way to end the year,” and after the usual winter downturn this year he predicted more records would be set from May forward.

“Virtually any county that you drill in now is economic at today’s oil prices,” said Helms, noting that breakeven prices in many counties have dropped by $3/bbl to $8/bbl. “So as we move forward and get some warm weather, we are going to get more production growth.” However, from January through April “production will be flat or decreased.”

Month/month output could have been higher if not for a certain amount of self-restraint among producers, said Helms. DMR staff uses anecdotal information to calculate volumes of production voluntarily cut back.

“Our estimates are that this amounted to about 35,000 b/d in December, so it could have been 35,000 b/d more if we had adequate gas capture capacity,” he said.

December also had one shy of the all-time record number of producing wells at 15,351, with the record set in October. Since 2006, there have been $109 billion invested in the state in drilling and completing oil wells, according to Helms. DMR is still calculating the midstream investment over the same period.

For completions, weather is more of a factor, which is why they are expected to fall off significantly this month.

December showed some improvements in gas capture, and Helms is optimistic that operators by the end of this year will be back on track with state goals. Overall in December, 81% of the gas production was captured, but the current state-mandated goal is 88% where it will stay until Nov. 1, 2020 when it moves to 91%.